If you're one of the 83% of U.S. households you might have a little machine dripping one of the 2.25 billion cups of coffee consumed per day around the world. Or maybe your kettles boiling for a cup of tea, the second most popular beverage worldwide, behind water. Or maybe your infusion ingestion combines a little bit of both, your beverage allegiance shifting with your mood and the time of day. Regardless of when you drink it, and unless you drink only water, you've probably recently slurped, swigged or glugged back on a beverage made from a plant. 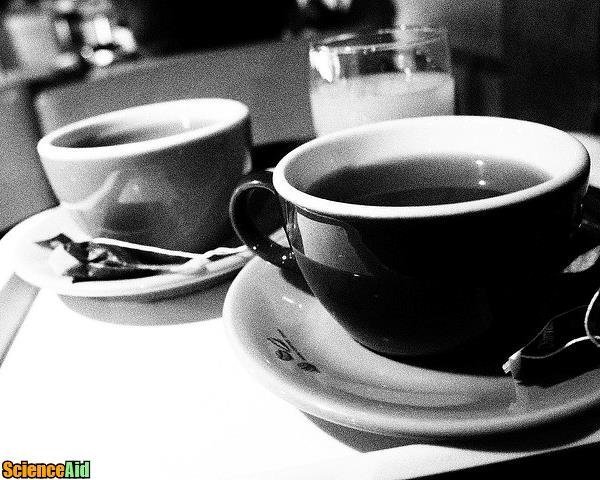 Beverage plants are plants grown and harvested specifically for their uses as beverages. The plants may have secondary uses, for example, coffee beans are primarily grown for (you guessed it) coffee BUT the plant also has some derivative uses as an extract or a whole bean. If you've ever gone to a candle store or been sprayed by the perfume ladies walking through Macy's you will notice little cups of coffee beans. With a quick sniff your snout is miraculously scent-free. 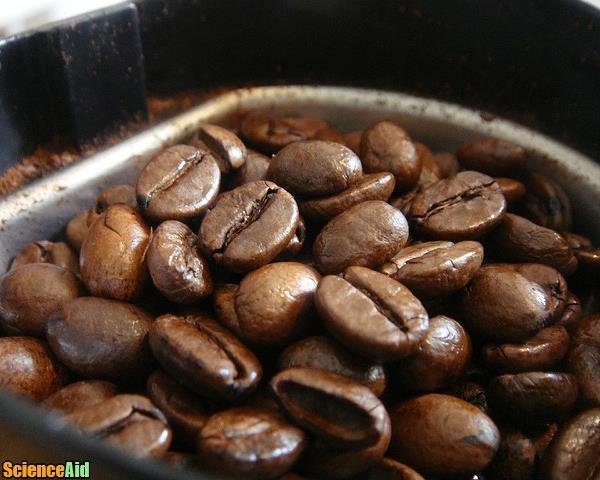 Throughout history, beverages have been an essential part of the human diet. Because of the liquid content, diversity of flavor, and the additional advantages (i.e. Caffeine, antioxidants) beverages extracted from plants have a special place in dietary history. Today these beverage plants are huge industries with valuable commercial markets. From cocoa to coffee, many economies around the world rely on the beverage plant market. 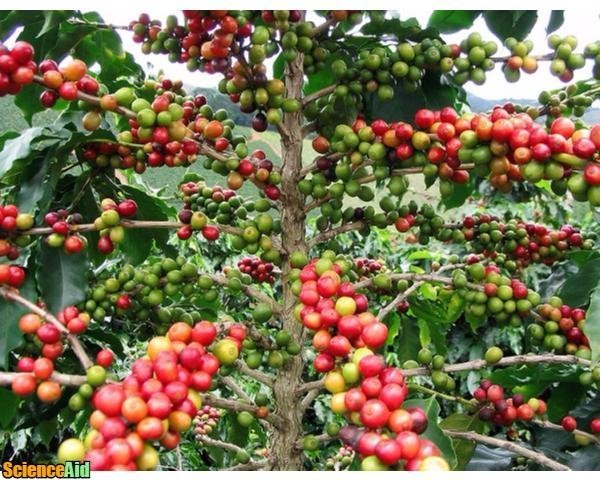 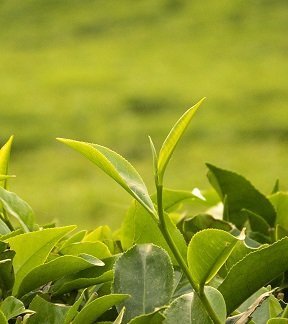 For the manufacturing of green tea, only the bud and one leaf attached to it are plucked from the plant. The processing of green tea involves three main steps withering, rolling and drying.

For manufacturing black tea, the bud along with three or four leaves and even sometimes twigs are plucked from the tea plant.

The various brands of tea commercially available are made by blending different grades of tea leaves which are then packed and sold in the market. 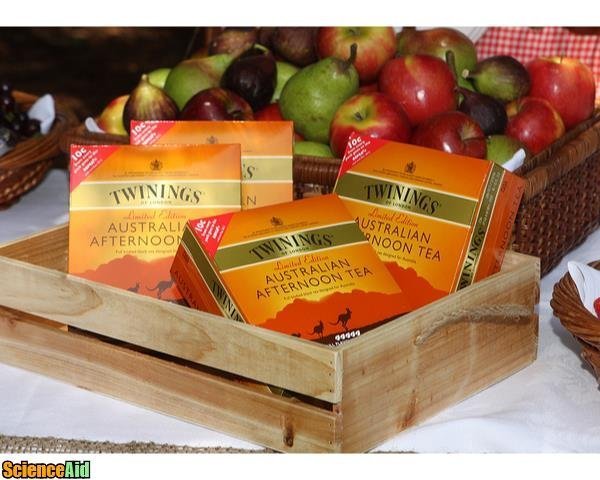 The distinctive character of tea is mainly due to three principle contents: essential oils, alkaloid fraction, and polyphenol. The aroma or the fragrance of a tea is due to the oils while the stimulating properties are due to the presence of alkaline caffeine. The slight bitterness is due to polyphenol (tannins) which also give tea astringency. Tannins readily dissolve in water in black tea as they are released during fermentation while in green tea they are still bound in the leaves and are not soluble in water.

When tea is prepared, caffeine easily dissolves in the water and if consumed quickly it provides a refreshing and stimulating effect. However, if left to steep then the tannins in the tea leaves mix with water, the caffeine dissolves and the tea turns bitter.

Tea has astringent, stimulating, diuretic and nervine properties. It contains about 2% of caffeine and 13-18% of tannins and 2.5% of theine. Additionally, tea has Vitamins, B-complex and nicotinic acid. 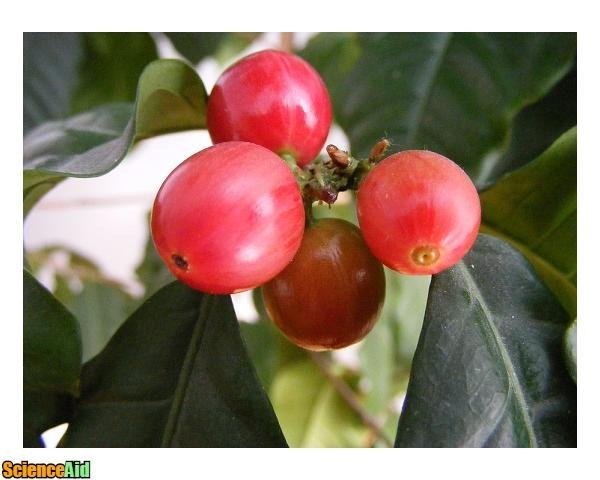 The word coffee comes from the word kaffa and is the name of a province in Ethiopia. The word kaffa is supposed to be derived from the Arabic word 'qahwah' which means a drink.

Evidence exists of the use of coffee as a stimulant since ancient times in the monasteries of Ethiopia and Yemen. Just like tea, the discovery of coffee is rooted in legend. The legend is that young goat herder in the Kaffa province observed his goats being excited after chewing on berries from the coffee plant. He took the berries to a monk who tried to burn them but the burnt berries gave out a thick and wonderful aroma. The berries were then pulled out of the fire, ground and mixed with water to make a brew similar to today's coffee drink.

Coffee was traded in the mid-15th to 16th century and traveled to South India, Sri Lanka and the Malay islands along with Arab traders. Today, Coffee is arguably one of the most popular beverages and is a major cash crop for developing countries. It is grown in over 70 countries such as Brazil, Mexico, Colombia, Ethiopia, Ivory Coast, Uganda, India, Indonesia, and Sri Lanka.

Coffee berries are hand-picked after they ripen in the tree. They are either selectively picked i.e. only the ripe berries are plucked off or stripe picking when all of the fruit is removed from the flowering branch at once. Coffee beans are obtained from the berries through either of the following two methods:

Caffeine and caffetannic acid are the two main alkaloids present in a coffee bean. Caffeine is about 0.75 to 2.5% which gives it the bitter and stimulating effect. Raw seeds have more caffeine than roasted seeds. A coffee bean gets its flavour from a number of factors such as the percentage of volatile oils present in it along with caffeine. The other factors that contribute to a coffee bean's complex flavour are the soil that the tree has grown in, the moisture content in the air, degree of ripening of the fruit, methods of extraction as well as the amount of time it has been roasted for. Prolonged roasting renders a coffee bitter while under-roasting effects its extraction for liqueur. 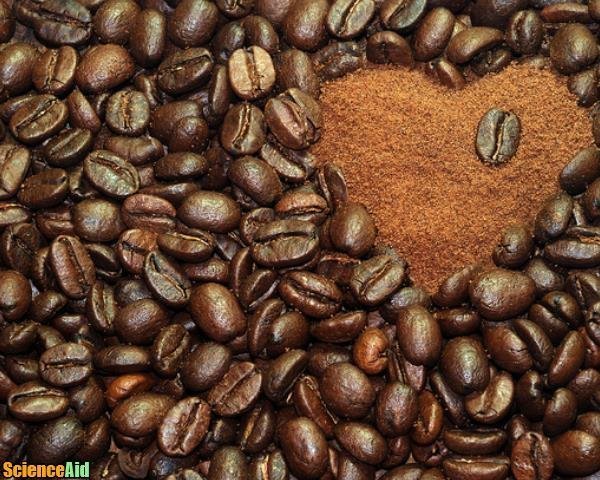 There's nothing better than a warm cup of hot chocolate after a day of skiing. Cocoa and chocolate are products that are obtained from roasted kernels (ripe seeds) of the plant Theobroma cocao. Cocao belongs to the genus Theobroma and is sub-classified under the family Sterculiaceae. The name Theobroma is a Greek word and stands for theos: " god and broma: " food which translates to food of the gods. 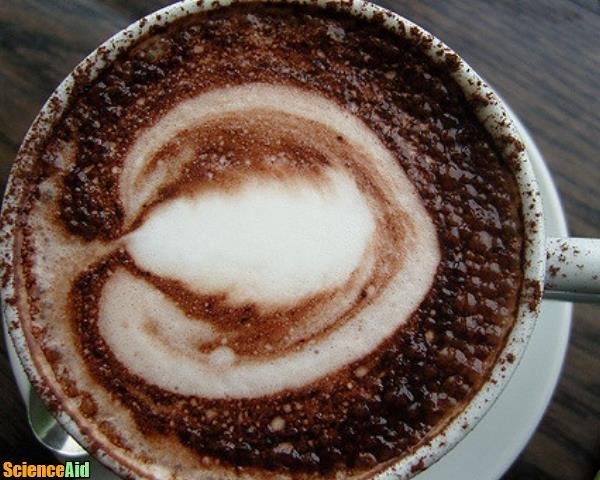 Cocoa is a native of the tropical regions of Central and South America countries. The plant has existed and was used by the natives of these regions long before consumption in the New World. The earliest consumption of Cocoa is estimated to be 1500-400 BC. The cacao plant was being formally cultivated and used as a barter good in the Mayan and Aztec civilizations from the 600 BC until 400 AD.

The habit of drinking extracts of Cacao which came to be known as Cocoa was brought to Europe by Spanish traders in the 16th century. The Spanish adapted the cocoa to their own taste by adding spices like cinnamon and pepper along with cane sugar. 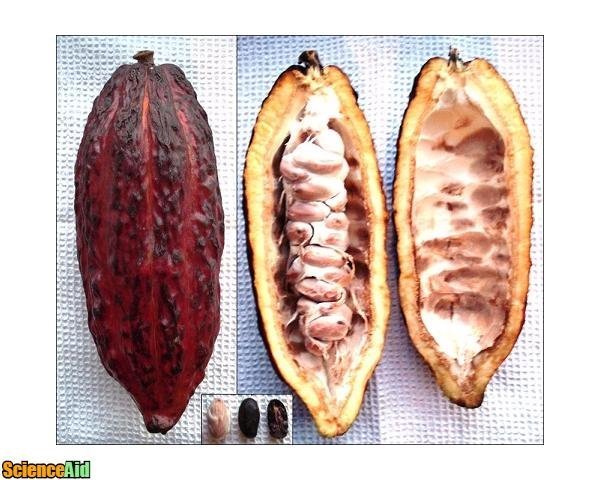 Because machinery could damage the pods, cocoa pods are harvested by hand. Once collected, the pods are processed, with each pod cut open and the beans removed. Next, the beans go through a fermentation process. There are different methods of fermentation but they all involved heat. Once fermented, the beans are dried and shipped to chocolate manufacturers.

In recent years, consumers have become educated on the highly problematic processes and methods used in the production and distribution of coffee, tea, and chocolate. Beverage companies have monopolized the market and millions farmers of these crops are often vulnerable to the finances offered by these companies.

You've probably seen "Fair Trade" coffee, tea and chocolate while shopping, the Fair Trade label guarantees fair prices for their crops, sustainability for the environment and adequate working and living conditions for these farmers. If you want to learn more about Fair Trade and the benefits for farmers and workers when you buy Fair Trade, check out: [Fair Trade International] [Fair Trade Canada] [Fair Trade USA] 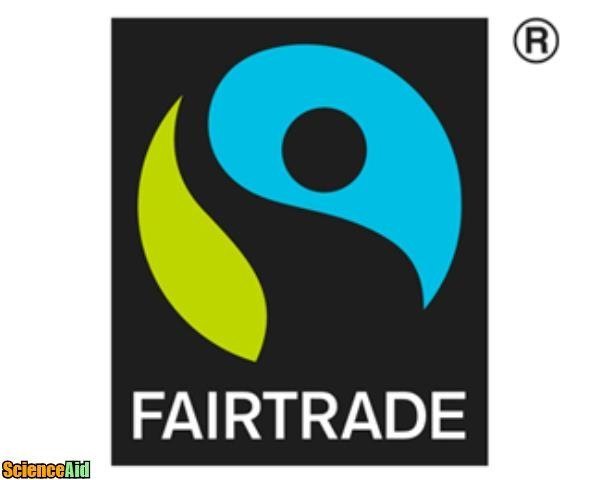 Thanks to all authors for creating a page that has been read 9,787 times.