NAND and AND Gate

NOR and OR Gates

A large number of electronic circuits (in computers, control units, and so on are made up of logic gates. These process signals which represent true or false. 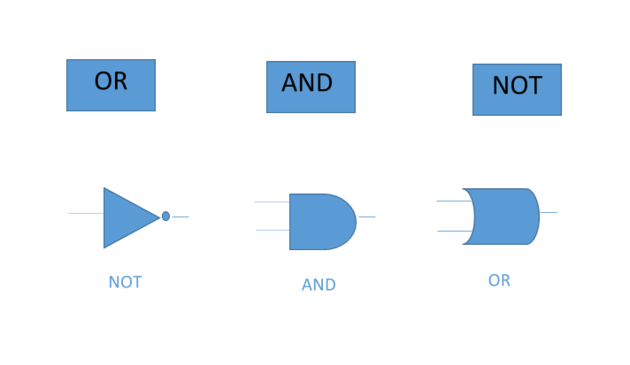 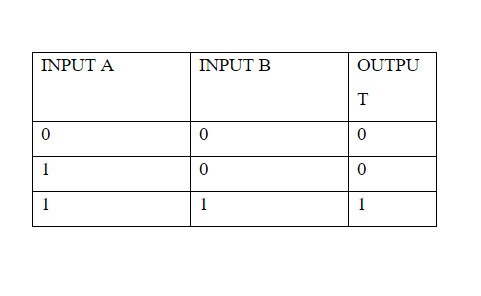 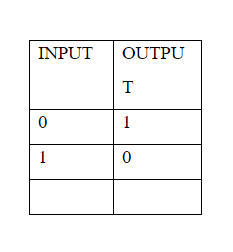 NAND and NOR gates are also common, these gates are simply an AND or OR gate which has a NOT gate directly after it, thus the NAND and NOR gates output will simply be the inverse of the result of an AND or OR gate. Exclusive OR (XOR) and exclusive NOR (XNOR) gates are also widely found. The XOR gate gives 1 output when inputs are different, i.e one is 1 and the other is 0. The XNOR gate acts as a comparator, it gives a 1 output only if two input is the same.

The operation of the logic is analogous to the operations of a Boolean algebra. A Boolean algebra is a set on which certain axioms are stashed such as commutativity, associativity, a distribution law, existence of a zero element, unity, and complements. Thus Boolean algebra can be used to examine how logic gate work. The AND operation is written as A AND B = A: B, while OR is written A OR B = A+B, compliments are written with a bar A. some useful identities for manipulating equations are De Morgan's law A: B =A+B

Logic gates can be combined in different ways to construct more advanced circuits one common example being the J-K flip-flop. This is built from NAND gates and is capable of 'storing' a bit, a logical 1 or 1; essentially it can be set to a stable value depending on the inputs. The flip-flop has two parts, one for storing the bit (the slave) and one which is used to reset it based on the particular values of the input (master). If the inputs of the labeled J and K, are 1 and 0, respectively, then the inputs labeled Q and Q, are 1 and 0. The slave will only change state when the clock pulses and the inputs have changed, however, if but inputs are 1 continuously then the outputs will change every time the clock pulse.

NAND and AND Gate

A NOT gate conjunction with the NAND gate was used to verify the logic and the AND gate.

NOR and OR Gates

An OR gate and a NOR gate were constructed using AND and NOT gate. The logic of the NOR and OR gates was varied.

EXCLUSIVE OR AND EXCLUSIVE NOR CIRCUITS Other ways of presenting logic gate and its circuitry are as follow; 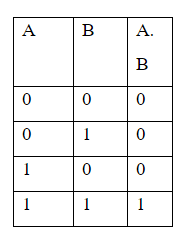 AND GATE: The symbol and truth table for an AND gate is shown below:

If the inputs A and B are high then the input is high, often a (.) dot is used to signify the AND operator when writing Boolean equations.

OR Gate (sometimes referred to as an inclusive OR). The symbol and truth table for an OR gate is shown below: 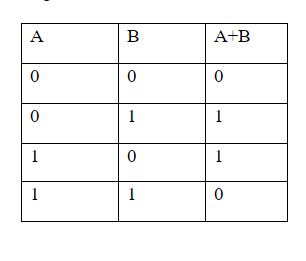 If inputs A OR B are high (or both) then the output is high. Often a (+) is used to signify the OR operator when writing Boolean equations. 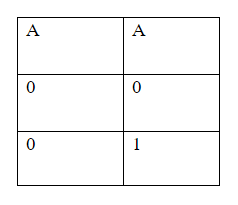 The output is NOT what the input is. They are called inverters.

Made by combining an AND gate and a NOT gate. The equivalent circuit is:

The symbol and truth table for a NAND gate is shown below; 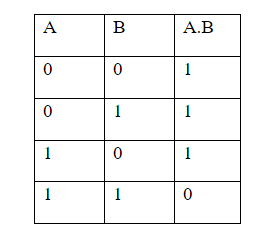 The symbol and truth table for NOR gate is shown below; 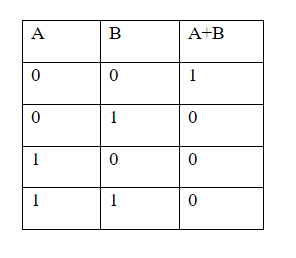 The symbol for a XOR gate is

XOR gates are represented with a (+) symbol

When designing circuits it is useful to be able to simply logic equations. By simplifying the equation of a circuit, we can reduce the number of gates that will be needed to implement the circuit when it is constructed. This has cost and performance benefits.

The following equations are used to reduce logic equations:

Remember that the optimal solution is not always the solution with the fewest gates. In terms of cost, the optimal solution is generally that solution which has the fewest logic chips, assuming that the cost of logic chips does not differ greatly for different logic gates. (a chip which contains four AND gates cost roughly the same as a chip with for OR gates). This has not always been the case.

These can be a bit tricky to remember. And aid to memory is " if you break the line you change the sign".

This method is a graphical aid to reducing logic equations its primary limitation is that is not effective for more than four variables. The map takes the form of a table laid out as shown below. The order of the possible variable states is important. A Grey code must not be used. A Grey code is a code in which at most one-bit changes in successive numbers

All the combinations which result in '1' as the result are marked in the table and grouped together. See the class example for the further information on grouping reduction. 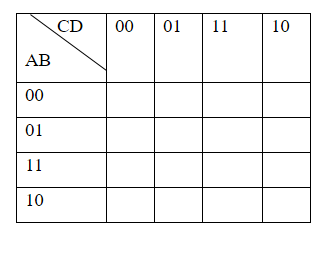