High-Level Language or HLL are the languages that are designed specifically for the programmer with much easier syntax. High-level language is much easier to figure out because there are more English-like Languages in written programs. However, This high-level language must be converted to machine language, since computer only knows 1s and 0s. This translation is done by a compiler or interpreter depending on the style. Compiler/Interpreter takes in the source code as an input, process it by understanding the system and finally producing executable file meaning the computer readable file. It is also important to keep in mind that higher level languages mostly focuses on software development aspect and not on the hardware aspect. 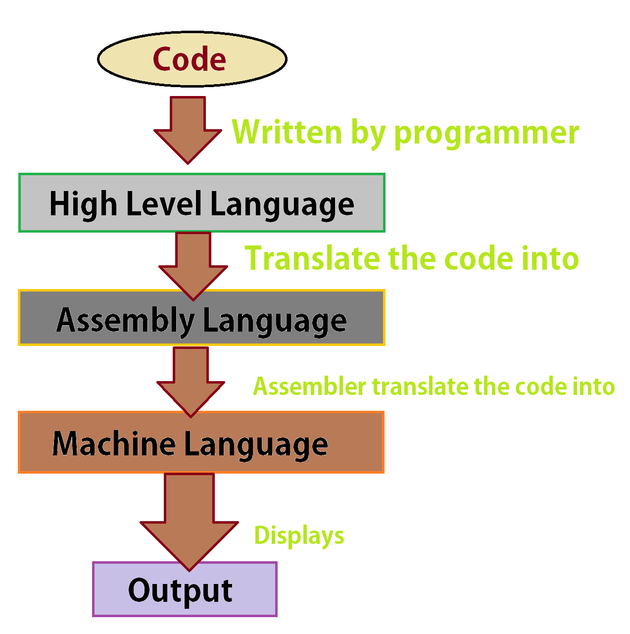 Language translation is the process of translating a program (source code), written in the higher level language to lower level language. This translation process can occur once or multiple time depending on the degree of programming. A program called translator is responsible for this process. Initially, Translator first compiles the program meaning it scans for any possible error or mistake done by the programmer. If there are any mistakes then it reports the error to the developer and stops the process of translation since a program with flaws cannot be executed.

Here, "MOV" is an opcode that manipulates the operands. In the example above, A is an operand to which 03 hex value is assigned.

Assembler is a translator that translate a program written in Assembly language to object files. Since computers only understand machine language, It is important the program must be converted to machine compatible format. Assembler is also used with higher level languages like Java, C, C++, Python, etc. This high-level language is first interpreted or compiled into assembly files (C, C++ in this case), then the assembler comes in and converts these assembly files to object files.

The linker is a computer program that takes a bunch of object files as an input and combines all these object files as a single executable file. Initially, Programs written by programmers are compiled by compilers. Once the records are collected, they are converted to object files which are then fed as an input to the linker. Linker converts these files to executable or even as a library data for further use.

Link libraries are just a collection of routines, variables that are used to bind or link a compiled program to an executable file.

Quick overview of the process : 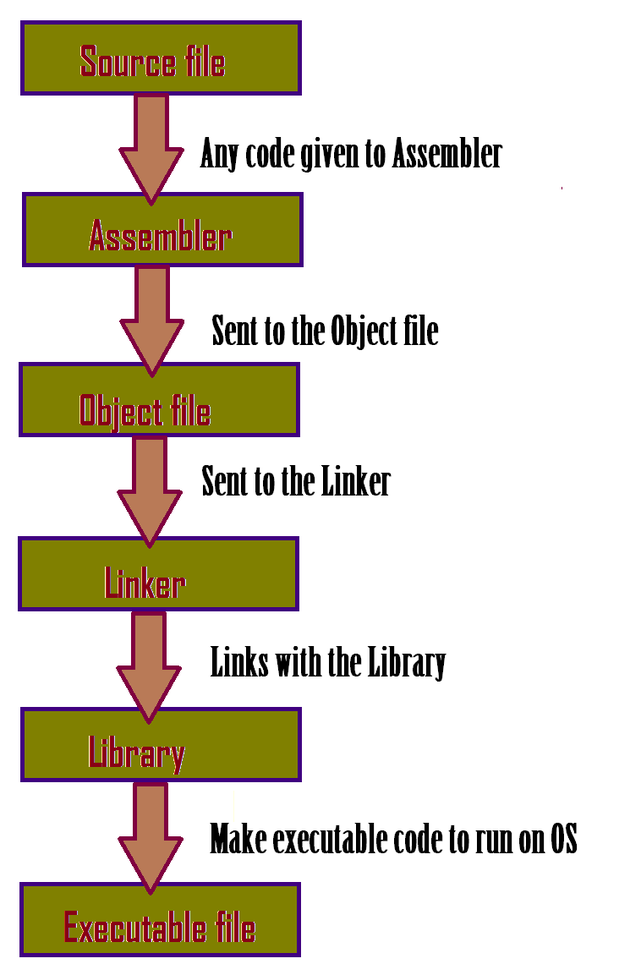 As we can see from the diagram above (Figure 2.0), The job of a linker is to link the files to the library. Ultimately, An executable file is produced to run on the operating system, Windows.

A debugger is a software that is used to find bugs in a program. No one is perfect, Humans are prone to make mistakes, Programmers are no different. A script written for a software contains lines of codes no less than a thousand. Finding errors from thousand lines of code is not an easy job. For this matter, a software called debugger was created that figures out if there is any error in the program and If there is a mistake, the debugger locates the error for the programmer. Hence, This saves tons of time for developing the software rather than wasting it on finding errors. It is, however, Important to note that a debugger is a smart program but it only finds syntax mistakes and not logical errors. Logical errors are nothing but the logic set by a programmer. Which is something the only developer can understand and solve it.

Editor is a program that allows users to write text, Read text from it and even save it. We have tons of editors available for us. Editors are used for a various purpose, There are a lot of editors specifically designed for programmers that actually help in proper syntax, Syntax coloring and much more. Some of the modern writers are Notepad++, Sublime Text, Vim, Geany etc. Not to mention, These editors are for free and are used by many professional programmers. In a nutshell, An editor is a program that lets you store text in a file.

As we know, Data is any information stored in a computer so that it can be retrieved later to process that information. Interestingly, Computer only uses bits, i.e Binary digits 1s, and 0s. But we humans can't work with only bits, We need alphabets, Numbers, and even punctuations. In order to solve this problem, a standard method called ASCII was used in computers. Internally, A computer stores 1s and 0s for every letter. In other words, Each character on our keyboard is assigned a code in the computer according to ASCII standards. For example, character "a" is assigned a code 97 decimal number, Character "A" is assigned a decimal number 65. Notice how a letter "a" (lowercase) is different than "A" (uppercase). For every character on our keyboard, There is a code assigned to them. That is how data is represented on a computer.

This article is part of a series on Computer Organization and Assembly Language (COAL). Read the full series here:

Thanks to all authors for creating a page that has been read 3,315 times.