A Classical Theory of Relativistic Strings

How to do String Theory:

String Theory is a theory of quantum gravity of one-dimensional objects, that encompasses all the theories which explain how the universe functions. The idea behind the string theory is that matter does not consist of point particles but rather it is replaced by strings. These strings can be either open or closed depending on the type of the particle that is being replaced. The string length(ls) is 10-33cm. Also, in string theory, one replaces Feynman diagrams by surfaces, and wordlines become worldsheets

The Strings correspond to Bosons. It requires 26 dimensions for its spacetime.
Advertisement
Was this step helpful? Yes | No| I need help

All of these theories use supersymmetry. Thus, for every boson, there exists its superpartner fermion and vice versa.

String theory naturally exists in D > 4. It can be readily supersymmetric. So that one might hope that string theory could be the UV completion of the standard model.
Was this step helpful? Yes | No| I need help

Let us recall Quantum field theory. For example, a toy model of scalars

that interactions λk with:

General relativity badly behaves in the ultraviolet. We can understand this intuitively. Consider a high-energy collision between two point particles in GR + QFT

This high energy collision can produce a microscopic black hole. That black hole can be nonlinear. Let us consider:

A Classical Theory of Relativistic Strings

Where we treat T as time direction. Now let us assume, Minkowski signature for both spaces though will soon rotate into Euclidean coordinates on the worldsheet. 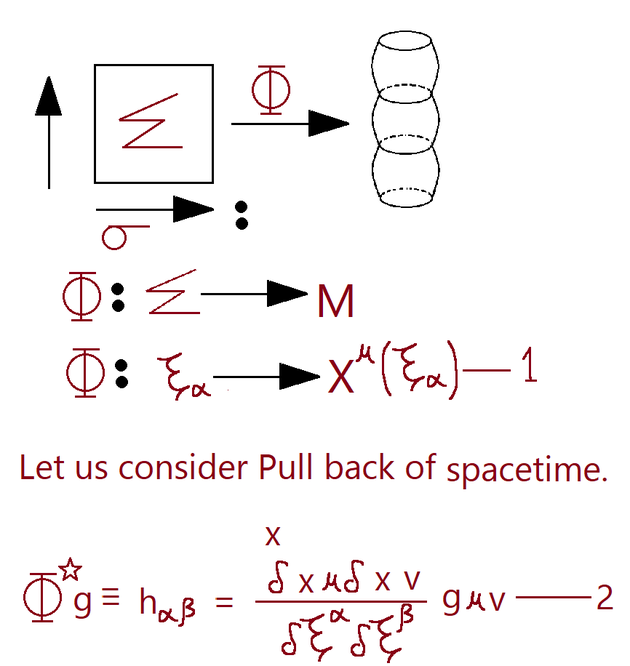 The natural measure for the size of the worldsheet is the usual volume,

An Analogy to the Relativistic point particle:

For a point particle we would like to consider the word line with single parameter ξ = T the pullback of the metric is simply,

So that the volume of the worldline is embedded into the target space,

We are thus inspired to use Vol(ξ2) as an action for the relativistic string. This is called Nambu-goto action.

Equation of motion for the to-be quantized field's X :

As quantum field theories, we could write down

But equation 8 does not obey this action, to fix up this action we introduce a compensator field e:

One can think of this compensator as a lagrange multiplier, or more usefully as a metric on the wordline. If we assume that under reparameterization we have,

The equation of motion for the compensator will now be:

Similarly, The EOM for the Xμ field is:

We would now like to find the analogous quantization friendly action for the string. This is called the Polyakov action.

According to sigma model,

Where Gmn, is a metric on the field space. To go back and forth from the polyakov action for string theory and our F model analogy we note,

Which vanishes in Vacuum. However, let us note that the Riemann Tensor obeys,

Contracting the Indices to get the ricci tensor, we find:

plugging this back into the Riemann tensor, we obtain:

Which can again plug back into Ricci tensor to find (Vacuum):

We want to take the variation of the action with respect to the worksheet metric γαβ. In particular, we would like to write out the tricky term δ√-r/δ γαβ , recalling that r = δeδ γζσ We can involve a well known result for a general metric gab,

Which can prove by using det m = expTrLog m.

By swapping the height of the indices, we can see that we pick up a negative sign since,

The variation of our action with respect to γρσ is then,

With equation of motion,

When that EOM are satisfied, one can take a determinant to prove.

How to do String Theory:

Pick a background spacetime M endowed with a metric, which in some local co-ordinates looks like,

There are some other fields to specify, too, but let's ignore them for now. Consider the set of map's

Where, σ,T, are local coordinates on the world sheets.

This is meant to be a proxy for a physical quantity like a scattering amplitude for two strings to go to two strings. The data about the external states are hidden in measures, Hence the subscript 'ws' stands for worldsheet.

The Feynman-Kac formula says that a transition amplitude takes the form:

Can be written as a sum over trajectories that interpolate between specified initial and final states. For example; for a massless charged scalar particle, propagating in a background spacetime with metric gμν and background (Abelian) gauge field Aμ, The worldline action takes the form,

Where, x = δ1x. Note that minimal coupling to the gauge field can be written as,

Taylor expands around some points in the target space, which let us call O, for example:

And the coupling to the gauge field becomes,

Near any point in the worldsheet, it is just free propagation. This implies a certain uniqueness( Good thing Number four): Once the free theory is specified, the interactions are determined but only for some choices( M,*), and can be even defined as I. To see why, let us consider the simplest example where, M = IRD-1,1, with gμν = ημν = diag(-1,1,1,1...1) then the worldsheet is 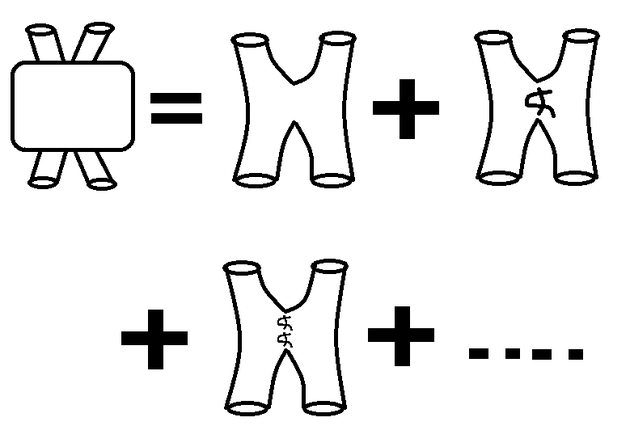 Crudely rendered perturbative interactions of closed strings. Time goes upward. Slicing this picture by horizontal planes shows that these are diagrams which contribute to the path integral for 2 to 2 scattering, Tilting the horizontal plane corresponds to boosting your frame of reference and moving the point ,where you think the splitting and joining happened, alluded to twice so far:

People will disagree about the factor of 2 is π, Here, (2) is acting for free Bosons, we can compute:

The equation of motion, O :

This is solved by superposition of right movers and left movers.

To study closed strings, we can treat the spatial direction of the worldsheet as a circle,

In which case we can expand in modes,

For open strings, the boundary conditions will relate the right moving and left moving modes: αl ∝ α , we can quantize this canonically and find;

Where, "a" is a normal ordering constant, which turns out to be 1. Here comes the problem: Consider the state,

We face, the choice ||| BAD > ||2 < 0, or EBAD < 0 Well, Neither is okay, especially since EBAD becomes arbitrarily negative as n gets larger. Now, We can build physical states that results look like. 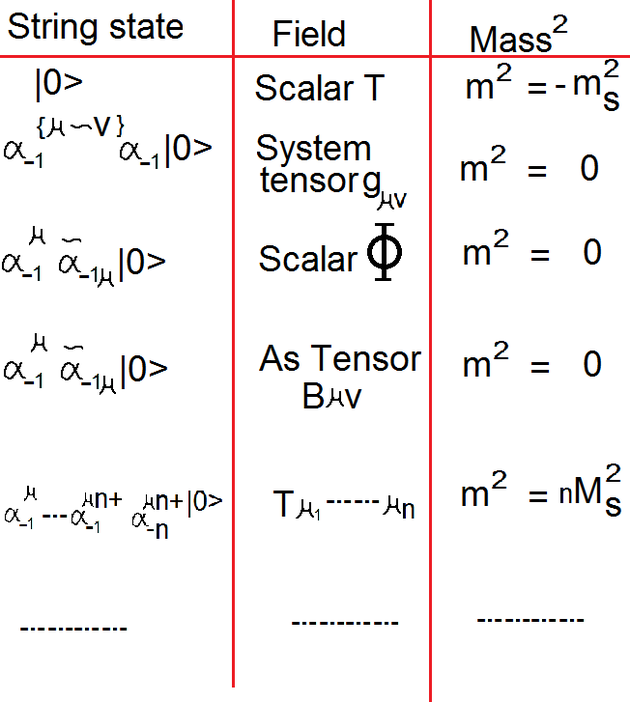 There is a general theorem that massless symmetric tensor like g μν, which interacts must couple to stress energy, and hence is a gravitation using the machinery built from the above picture. This mode can be seen to participate in nontrivial scattering amplitudes, which indeed reduces, those computed from GR, to lower energies. So, string theory, however unwieldy, this description can be, is a Quantum theory of gravity.

Thanks to all authors for creating a page that has been read 531 times.