Edited by Tosin Emmanuel, Jen Moreau, Sharingknowledge, Chameleon and 1 other

Motion involves a change in the position of an object over time. Motion influences when objects move and the forces necessary to make them move. Classical mechanics is the branch of physics that studies motion. The study of classical mechanics is quite expansive and includes the study of motion at the nanoscale and microscopic level (protein folding, enzymes) macroscopic level, all the way to the motion of aviation crafts, planets and satellites in the solar system. Most of our laws concerning motion and relativity come from the works of Sir Isaac Newton and Albert Einstein.

Newton's law of motion is the foundation for Classical Mechanics. These describe the basics of force and its application to motion and include:

In Classical Mechanics, there are two fields of studying motion. Given Newton's laws of motion, it is understandable that these two fields would be divided by the main effect on motion and velocity: force.

Depending on the mass of an object, the force applied, the velocity and momentum, objects move in various patterns of motion. There are five patterns studied in Classical Mechanics.

A motion is usually represented in space and direction at a particular point in time or time interval. However, this representation is dependent on position, distant and displacement. The position of a point in space is determined by its distance and direction from another point. The position of an object is determined with respect to a standard or known position usually referred to as reference point. To determine the position of an object in a plane, it is required to draw two lines intersecting each other and perpendicular to each other. The horizontal line going across from left to right of the plane is called the x or abscissa axis and the vertical line is called they or ordinate axis.

Point O to the left is negative in the x-axis while to the right, it is positive in the x-axis. Points above the origin O is positive in the y-axis while points below the origin O is negative in the y-axis. Therefore, the position of any point is determined by the coordinate which is the x-y coordinate. In advance studies, the position of an object in space is usually represented using the x, y and z-axis thus, it is evaluated using the circular coordinate or the spherical coordinate. In the study of motion, it is necessary to specify the direction in which a body is moving. Displacement is defined as the distance traveled in a specified direction. Imagine a person walking 600 meters east and then walking back 400 meters to the west, the total displacement, in this case, is 200m. The person is now 200m from the starting point.

When the distance of a moving object is measured at known time intervals the value of distance on the y-axis and the time interval on the x-axis can be plotted on a graph. When these points are joined, a distance/displacement time graph is created. 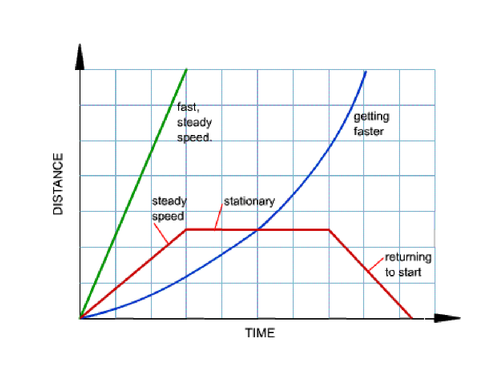 The distance/displacement time graph is used to determine various parameters of motion like the starting point, end point, velocity of the object the time the object achieves a certain speed.

Thanks to all authors for creating a page that has been read 8,314 times.