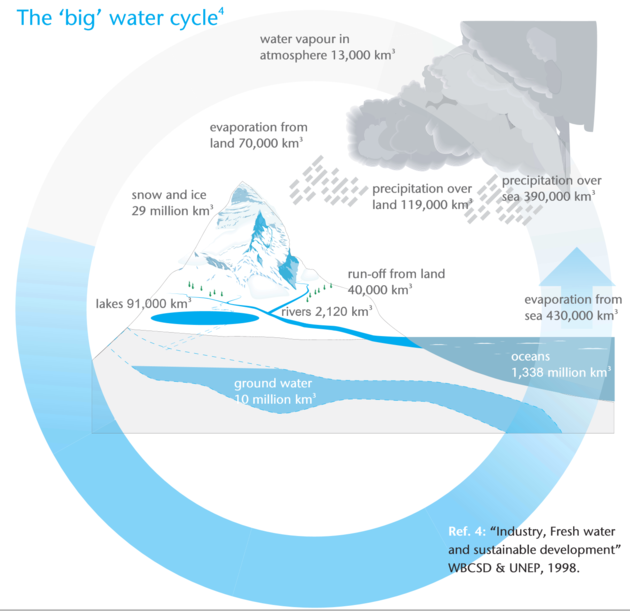 97% of the Earth's surface is covered with saltwater oceans. 2.5% of Earth's water is freshwater, but it's locked up in ice. The remaining 0.5% is available for human use. We use surface water to supply most of our drinking needs, with groundwater being the secondly most used. Given the little water available for use, there are water wars around the world, that include countries fighting over sections of rivers. Some areas in undeveloped countries walk miles to rivers or wells to fill buckets of water. 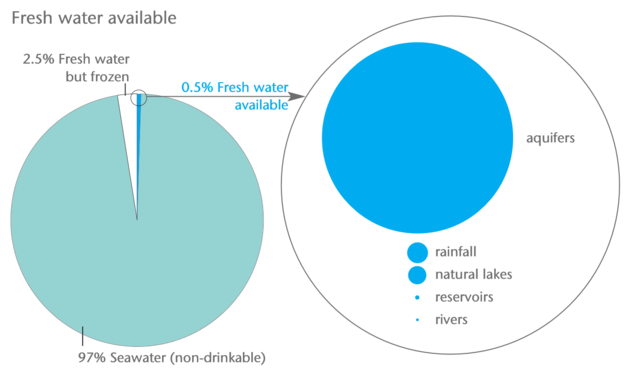 Water across the globe has many reservoirs as shown in (Fig. 1).

The ocean absorbs solar radiation, which warms the water. Increasing global temperatures are creating increases in ocean water temperatures. This increases the amount of water evaporating, providing more moisture suspended in the air. As the water rises in the atmosphere, it cools and condenses, forming clouds. The increased evaporation of oceans is creating more clouds on earth, which increases rain and storms. The increasing cloud cover acts as a negative feedback loop. It increases the earth's albedo, which means it blocks incoming sun radiation and reflects it back out into space. You would think this would reduce the global temperature, but it is offset by the increased moisture and greenhouse gasses trapping heat in the troposphere. Additionally, as land continues to urbanize more surfaces are changing from green to asphalt and roofs. About 15% of evaporation on land comes from impervious surfaces. This increases albedo at the surface, traps heat under the clouds, and increases surface temperatures.

Evaporation is the process in which water turns into a gas, or vapor, and rises into the atmosphere. This occurs because heat increases the movement of water molecules, to the point that they break away from the collection of water molecules. The warmer the water, the more it evaporates. To evaporate 1 pound of water, 1,000 British thermal units (Btu) of energy is required. Compare this to one kilowatt hour of energy for electricity at 3,415 Btu, or burning gas at 100,000 Btu. It doesn't take much heat to evaporate water. Evaporation from the oceans provides most of the water to the atmosphere, approximately 90%. Evapotranspiration provides the rest. 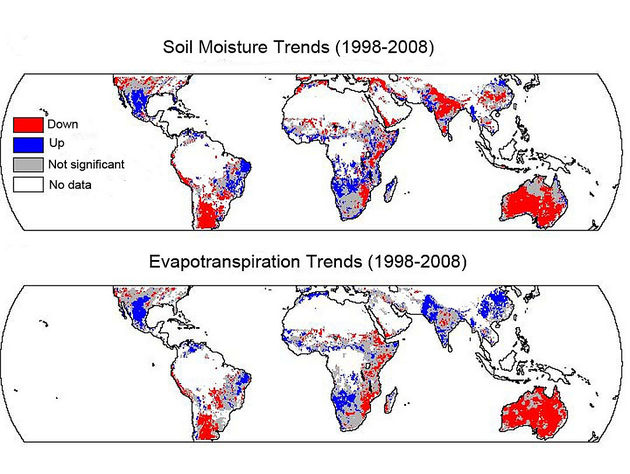 Figure 2. Trends in Evapotranspiration and movement of moisture into the atmosphere.

Groundwater is water that flows beneath the ground. It flows at different rates, depending on the material through which it flows. Groundwater may flow 1m/yr when moving through cracks in bedrock or rock pores (i.e limestone, granite, shale). Bedrock is susceptible to cracking and folding due to earth and water pressures. Flow through subsurface soils is faster than rocks. The water table is the uppermost layer of the shallow groundwater aquifer. If the water table (Fig. 2) becomes above the ground surface, it causes ponding, wetlands, and water basins. Water wells may tap into this shallow aquifer for drinking water. The aquifer may extend anywhere from 2 to 75 feet or so. Some municipalities tap into the deeper aquifers for water supplies to its citizens. For example, the Floridan Aquifer provides potable water to much of the Southeast United States.

Percolation is water permeating down through earth's surface by filtration. Infiltration is shown in (Fig. 3). Water bodies and rain infiltrate the sediments below, pulled by gravitational forces, and eventually reach groundwater. This "recharges" the groundwater in aquifers. When water is drawn from aquifers, groundwater is reduced, the water table is lowered, and drilled wells no longer have access to water. Additional drilling to tap into the deeper water costs a lot of money. This can raise water prices in some areas. This is the reason we rely so heavily on precipitation and percolation processes. When more water is drawn than is filled, humans are endangered as aquifers can collapse, creating sinkholes. Overdrawn aquifers can also cause salt water intrusion along coasts. Water treatment in homes is necessary to remove salt from ocean water moving into coastal aquifers.

Precipitation is water vapor in the air falling back to earth. As water moves up into the atmosphere through evaporation, it cools in the higher altitudes and condenses. Precipitation can then fall to earth in several different forms. These are rain, hail, snow, and freezing rain. The type of precipitation that falls is determined by cycling in the atmosphere and temperatures. Precipitation patterns are increasing as the global temperature increases. This results in storms, floods, droughts, and tropical cyclones. 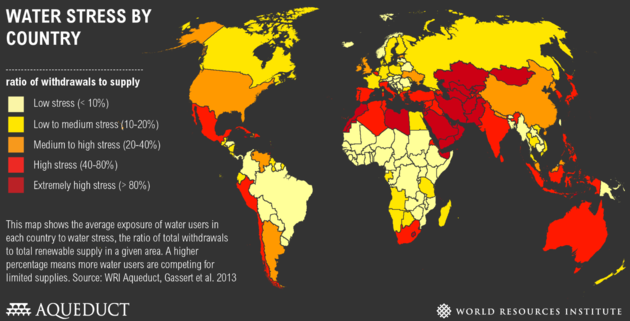 Figure 4. Water Stress in countries around the globe.

Water is a valuable commodity. The U.S. is lucky in that most areas have plentiful supplies. Not all countries are so lucky. Less than 10 countries have 60% of the world's total water supplies. The above image shows the countries that are most water stressed, meaning they do not have adequate supplies for its' inhabitants.

What can you do to reduce negative impacts on the water cycle?

Cutting back on water consumption decreases demands in aquifers and surface waters. Anything done to reduce consumption will benefit humans and the earth. Things you can do include reduced toilet flushing. The average flush uses almost 4 gallons of water, adding up to a U.S. average of 18 gallons per day. Water is often wasted by letting the shower run before you get in, leaving the water running while washing dishes or brushing teeth, washing cars, and gardening. Think before you use water. Preserving the water sources available now through pollution reduction will help. About 80% of pharmaceuticals are input to surface waters through U.S. citizens' excrement and disposal in toilets. Water treatment facilities do NOT treat water for pharmaceuticals. Return pharmaceuticals to medical facilities. Picking up trash and disposing of chemicals properly (not dumping on the ground) reduces pollution to groundwater and surface waters.

Thanks to all authors for creating a page that has been read 71 times.