What Is the Theory of Plate Tectonics

What is Plate Tectonics?

The History of Plate Tectonics

What is Plate Tectonics?

Plate tectonics is a theory that was first proposed in the early 1900s by scientist Alfred Wegener, but was not said to be true until the 1960s.

The History of Plate Tectonics

When Alfred Wegener first proposed the theory of continental drift, he described the tectonic plates, or the continents, as puzzle pieces fitting together. He continued to explain his theory after realizing the Earth's surface changing significantly over time while noticing that continents which, at one point, were not separated, were. This was also noted by paleontologists when fossils of the same species were found on different continents, now separated. Their combined observations determined that the Earth's lithosphere had, in fact, been moving over time.

The tectonic plates are found in the Earth's lithosphere, which is the outermost shell, or in other words, the crust and the mantle combined. The lithosphere is broken up into seven or eight major tectonic plates, as well as several minor ones. 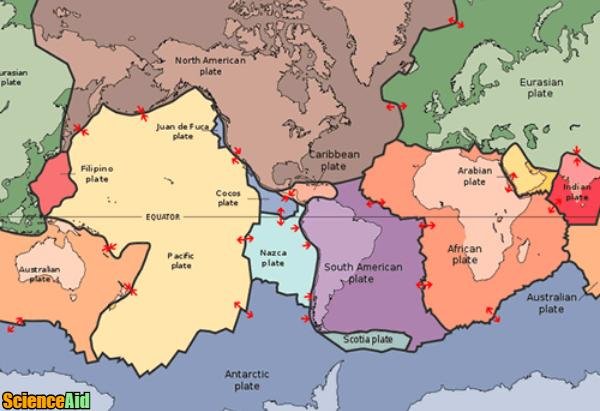 APA (American Psychological Association)
What Is the Theory of Plate Tectonics. (2017). In ScienceAid. Retrieved Aug 9, 2022, from https://scienceaid.net/What_Is_the_Theory_of_Plate_Tectonics

Chicago / Turabian ScienceAid.net. "What Is the Theory of Plate Tectonics." Accessed Aug 9, 2022. https://scienceaid.net/What_Is_the_Theory_of_Plate_Tectonics.

Thanks to all authors for creating a page that has been read 15,097 times.