Global winds and ocean currents are responsible for distributing global heat, which directly affects continental climates. To understand how these currents form, a knowledge of the impacts of Earth's motion is necessary.

Figure 1 shows Earth's tilt at two different positions during its revolution around the sun, the start of winter and the start of summer (solstices). Notice how the sun's rays differ in angle as they strike the earth at summer compared to winter. The differing angles of sun rays distribute unequal solar radiation from north to south. Axis tilt and revolution cause different seasons on different hemispheres.

Figure 2 shows green horizontal lines. These are the main latitudes influenced by indirect/direct solar radiation due to the Earth's tilt and revolution. The equator receives direct sun rays throughout the year. This causes heat to build along the equator, warming the air and water. Warm air rises because it is less dense, as does water. Cold air sinks because it is denser, as does water. Warm air is less dense than cold air because the increased energy from the sun causes the particles to move faster and begin to expand away from each other. 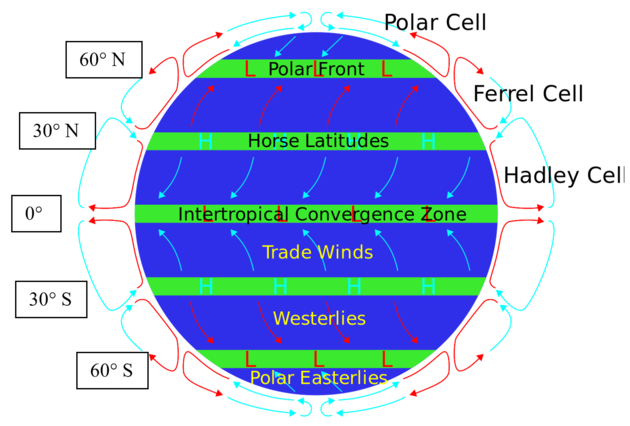 The Intertropical Convergence Zone, located along the equator, shows the letter "L" in red. This indicates a low (L) pressure. Pressure is a measure of force applied over an area. The equator has low pressure because the air rises due to heat, and so it does not press down to the earth's surface as hard as cold air. As the air rises, it moves towards the poles, becomes colder because it is away from the direct solar radiation, and then begins to sink. Latitudes where the air sinks exert increased pressure on Earth's surface, known as high (H) pressure. This is the meaning of the blue "H" in (Fig. 2). Generally speaking, lows are warm, and highs are cold.

The air sinks at equal distances from the equator, on latitudes 30° N and 30° S. These differences in density forms a rotation of air vertically through the atmosphere towards different latitudes, making a "cell." These cells are named according to latitude location. The Hadley cell air rises on the equator and falls at 30° N, and 30° S. A Ferrel cell rises at 60° N and 60° S and falls at 30° N and 30° S. The air rising at 60° N and 60° S will also sink at the North and South Poles. The figure depicts warm air rising with red arrows, and cold air sinking with blue arrows.

Figure 3. Side view of atmospheric convection cells with reference to latitudes. https://upload.wikimedia.org/wikipedia/commons/3/3e/Jetcrosssection.jpg

Figure 3 provides a side view of Earth's surface, showing the three cells in each hemisphere and the latitudes in which they circulate. Additionally, the temperatures and flow of air shown indicate the rainy weather observed at rising air locations and the faster air currents above the surface known as jet streams. Areas along latitudes in which the air is sinking tend to have drier climates, whereas rising air creates rainier climates. For example, dry desert areas are normally located around the globe along 30° N and 30° S latitudes. 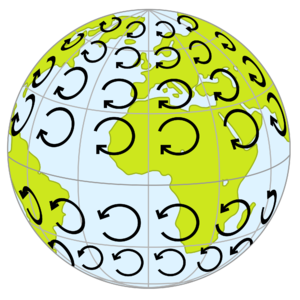 Now that you see how the air is circulating vertically, factor in Earth's rotation. The rotational drag of air caused by friction pulls air horizontally at Earth's surface. Combined horizontal and vertical air movement creates circular wind currents as shown in (Fig. 4). The Coriolis effect is this pattern of rotating air resulting from the earth's rotation. The ocean responds in similar circular patterns, forming ocean currents.

Compare the circular action of air in (Fig. 4) to the wind directions of the global winds shown in (Fig. 5). Global winds are strong winds that always flow in the depicted pattern because of the earth's rotation. Within the region from the equator (0° latitudes) to 30° N and 30° S, these strong global wind currents are called the Westerlies. Wind direction is always named according to the direction from which it comes. Therefore, wind flowing from the west is a westerly wind. The Trade Winds, named for supplying trade ships with a fast and steady wind to sail around the globe, flow from the east between latitudes 30° and 60° N and 30° and 60° S. Lastly, the Polar Easterlies flow from the east at each pole. Notice that the airflow rotates circularly where opposing wind directions converge. In the Northern Hemisphere the circulation is clockwise, and the Southern Hemisphere is counterclockwise (circulation pattern 1 and 2 in Fig. 5). The same pattern of circulation exists in oceans. 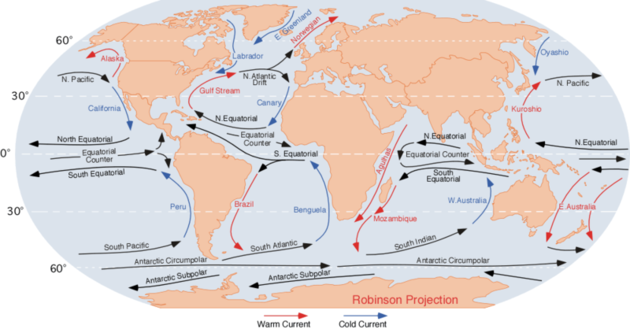 Without these ocean currents, heat would build along the equator making equatorial climates extremely hot, and cold climates colder. In (Fig. 6), observe the flow of water from the South Atlantic, north through the equator, and continue towards Norway. The warm water brought from the equator all the way to Norway warms the climate of the United Kingdom and other northern countries. These areas, as said before, would be much colder without this far-travelling ocean current. 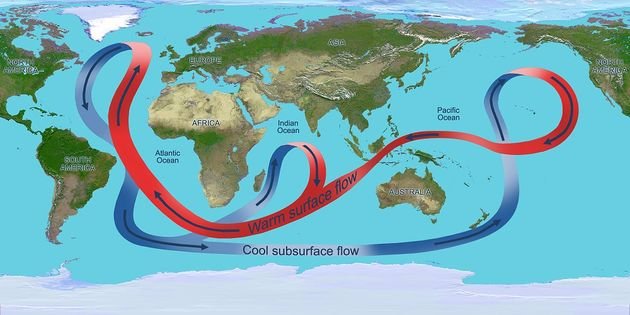 We have already looked at the horizontal ocean current along the earth's surface moving north and south. Ocean currents circulate the same way that the atmosphere circulates, horizontally around the globe, and vertically from ocean depths to the surface. Water moves up and down in the ocean due to temperature differences, just as it does in the air. Warm water will rise towards the surface and colder; denser water will sink to lower ocean depths. In addition to temperature, salinity (how much salt is in the water) will add to the density differences. Salt increases the mass per unit of water; therefore, the saltier the water is, the denser it becomes. The vertical and horizontal movement of ocean currents is shown in (Fig. 7). These enormous movements of ocean water, vertically and horizontally, forms a giant water circulation system that distributes cold and warm water across the globe. This deep-ocean circulation, driven by salinity and temperature, is known as the "global ocean conveyor belt." The figure shows the extent of the conveyor belt.

Thanks to all authors for creating a page that has been read 7,270 times.