The cell cycle is the name for the life of a cell. It can be divided into several different stages, as represented on the following diagram. 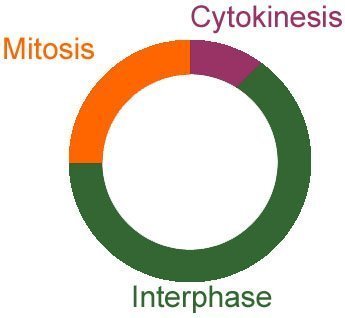 This is the stage of the cell cycle where no division takes place; as the diagram above shows, the cell spends most of its time in this stage. During this stage the cell grows, and towards the end, (as mitosis is about to occur), DNA will replicate.

This stage can be further subdivided into 4 stages:

Have a look at the diagrams so you will be able to identify each stage in an exam situation.

Cytokinesis marks the end of cell division and is a completely separate stage from mitosis. It's where the cytoplasm splits and the one cell becomes two daughter cells.

Cytokinesis in animal and plant cells is shown below.

Which part of the cell cycle is taking place when the chromosomes line up on the equator of the cell?

I tried to look for this answer everywhere and anywhere, but I cannot find the solution to my problem!! It is not at all written in the article, I have looked through thoroughly and properly but no answer or solution found yet.

The phase, where the chromosomes are gathered at the equator, is the Metaphase. This process of cell alignment happens during mitosis (division of somatic cells) and during meiosis (division of sex cells; gametes).

Thanks to all authors for creating a page that has been read 447 times.