Ecosystems: What is an Ecosystem? Population Stability, Succession

5 Parts: What is an Ecosystem? Population Stability Succession Referencing this Article Comments
Contents

What is an Ecosystem?

It is quite complicated getting an idea of exactly what an ecosystem is. It can be thought of as all the biological organisms within an area of study as well as the abiotic factors; sunlight, pH etc. Crucially, ecologists are looking at the interactions between these and so there are many layers.

The different components of an ecosystem can be thought of as existing at different scales. A Population is a group of individuals from the same species, and populations from various species make a community. The area that these communities live in is called a habitat.

Within an ecosystem, a species occupies a niche. This is best described as the particular role it has - for instance, a penguin's niche is living on land in the antarctic and feeding on fish. According to the competitive exclusion principle, no two species can occupy exactly the same niche, so to return to our penguin example, if another animal came to be living on land and feeding on fish it would be in competition with the penguins. Over time, the introduction of this new species would either cause penguins to go extinct, go extinct itself, or each would have to adapt to slightly different niches - perhaps living in different parts of the antarctic or by eating different fish.

Overall, an ecosystem is a community living in a fairly uniform habitat (rain forest, pond) that consists of interactions between organisms and their physical environmental (abiotic factors).

The size of a population in an ecosystem tends to stay fairly constant, albeit with fluctuations. There, however, are certain factors that will affect the sizes of populations outlined in the table below.

Many millions of years ago, the earth was devoid of any visible life but over time organisms began to colonize. The sequence of events is called succession and ends with what is known as the climax community This is the most stable community possible in that particular area. So succession could be thought of as the process of getting to the climax community.

There is generally a certain pattern to this process - where small plants initially grow for example, which changes the environment and makes it suitable for other species. Take the example a sand dune where a sequence of succession can be seen moving away from the sea, so it is on a geographic gradient. 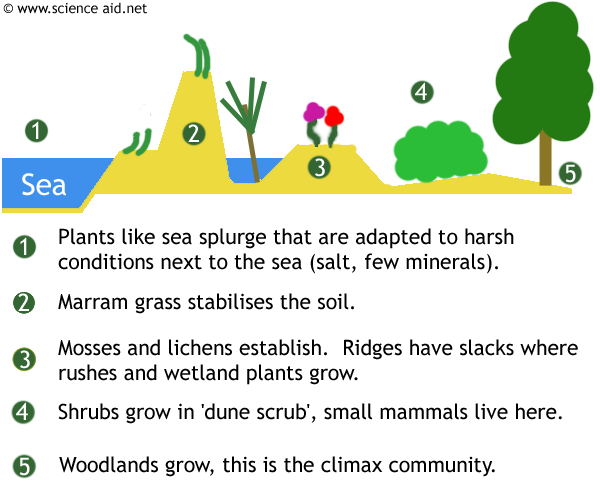 Next to the shore, are pioneer plants such as grasses. These make the dune more stable for more complex organisms. And this process continues and the dune is made more stable until the most stable community is reached: the climax.

Other examples of where succession can occur are on recently formed volcanic islands or in wetland formations. In each instance, the climax community is again woodland.

Thanks to all authors for creating a page that has been read 3,613 times.