Proteins are an extremely important type of molecule, making up everything from your finger nails to the haemoglobin that carries oxygen in your blood. Proteins are very important and can be quite complicated in structure.

A protein, put simply, is a special type of polymer. And the monomer of it is the amino acid. An amino acid's structure varies depending on the conditions it's in. The first image shows the amino acid as it is in crystallized form, and the image below is how it appears in nature as a zwitterion. 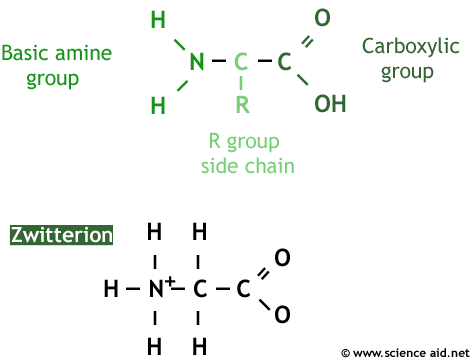 The amino acid is made up of three parts, as identified on the image. The charge of the amino acid changes depending on pH.

The R-group means any molecule can replace the 'R'. For instance, glycine simply has an -H instead and alanine a -CH3. This is why there is so much variation in amino acids. In total there are 22 different R-groups, each with a different three-letter abbreviation to represent it (Asn, Glu). Different amino acids are chosen in protein synthesis.

When a number of amino acids join up they are called polypeptides. Two polypeptides are called a dipeptide, three are called a tripeptide. Amino acids form by a condensation reaction as carbohydrates do, producing water as a product and then making a peptide bond. The image below shows graphically how this happens. 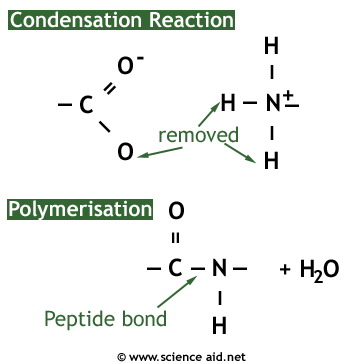 The structure of the protein can be divided into several different levels: primary, secondary, tertiary and quaternary. Below we go through each step-by-step.

A globular protein is a bit like a ball (e.g. haemoglobin and immunoglobulin). These are used for transport. They are enzymes and in membranes; since they are fluid (i.e. they can move).

A fibrous protein is long and thin, like a strand or fibre (hence the name). Myosin and collagen are examples of fibrous proteins, used to make muscle and bone. These types of proteins tend to be structural.

Thanks to all authors for creating a page that has been read 9,919 times.