On this page you will learn how DNA is merely an instruction of how to make a protein.

RNA stands for ribonucleic acid. There are several different types, distinguished by a small letter in front of the RNA. It is similar to DNA, and is made up of nucleotides, but with a few important differences.

This is the first stage of protein synthesis, where the DNA code on a chromosome is copied into messenger RNA (mRNA) 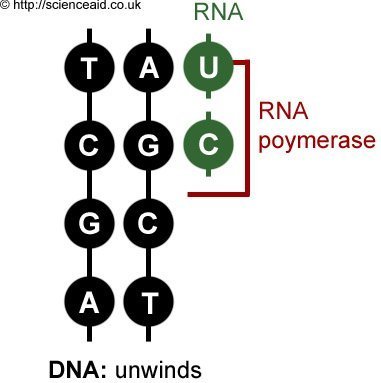 At this stage, the genetic code in the mRNA molecule is used to build a polypeptide, which can then be used for a protein or enzyme. It might even become one of the enzymes which helps in protein synthesis 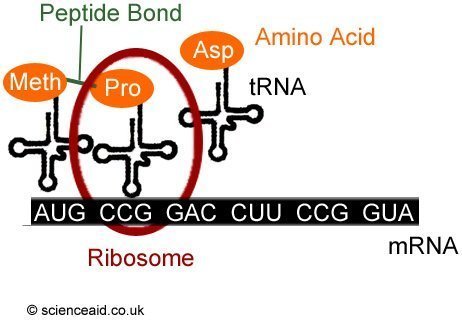 Floating around in the cytoplasm are ribosomes and tRNA molecules. This tRNA is attached to a specific amino acid at the top, and at the bottom is has an anti codon.

The anti-codon is complimentary to the codon on the mRNA, for example, the first codon on the mRNA is AUG, the anti-codon on the tRNA would be UAC, which corresponds to Methionine. The ribosome moves along the mRNA systematically fusing together the amino acids it goes along. Eventually it gets to a stop codon, so the chain is complete, creating a polypeptide. These can interact in different ways to create a protein or enzyme.

A gene mutation occurs when there is a change in the sequence of bases, such as when a gene is copied incorrectly. This can result in one or more different amino acids being incorporated into the protein. To simplify this, if the codon is supposed to be AUG, which codes for Methionine but a mutation occurs so that it reads AUC, it would be isoleucine, which changes the polypeptide and then the protein or enzyme slightly, however, it doesn't always result in a change because there are several codes for each amino acid.

There are three main types of mutations that can occur. Examples of these are in the table below.

Thanks to all authors for creating a page that has been read 335 times.