The Structure of Viruses

The Structure of Viruses

Viruses are very small, much smaller than bacteria. They range from 20 to 300nm, whereas bacteria are commonly in the range 2 to 5µm (2000 to 5000nm). Below is the structure of the human immunodeficiency virus (HIV). Influenza is different from the HIV in that it has no inner capsid or knobs on the glycoprotein pegs. 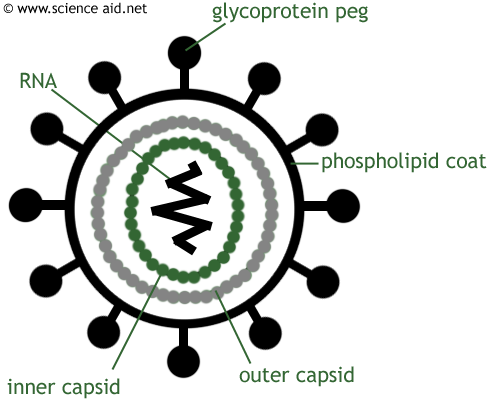 Here are the functions of the various structures in the diagram.

Influenza or flu is a very common virus that should never be mistaken for the less harmful, common cold. Influenza is transmitted in droplets that is breathed in when in the vicinity of an infected person. The virus can infect tissue in the upper respiratory tract. The virus incubates in the host cells for 3 days. When it bursts out, toxins are released that cause the symptoms; fever, headache, body aches, and tiredness. If secondary infection occurs, where bacteria take advantage of weakened immunity, t can be fatal to the elderly, the very young, and those who are vulnerable (asthma, bronchitis, COPD).

HIV is a virus that enters lymphocyte cells in the blood. It is transmitted from one infected person to another through direct contact of bodily fluids such as: Blood (including menstrual blood) semen and vaginal secretions. They can enter another's blood stream by small lesions. You can see why sexual activity had a huge impact on the spread of the virus. HIV can also be transmitted by using infected needles for injecting drugs (blood transfer). HIV usually leads to AIDS (Acquired Immune Deficiency Syndrome) where the HIV infects and destroys the T-lymphocytes so the immune system is impaired. AIDS patients often die from infections such as pneumonia, since they have no defence from it.

The life cycle of a virus as it replicates in the host cell is shown in the diagram below. 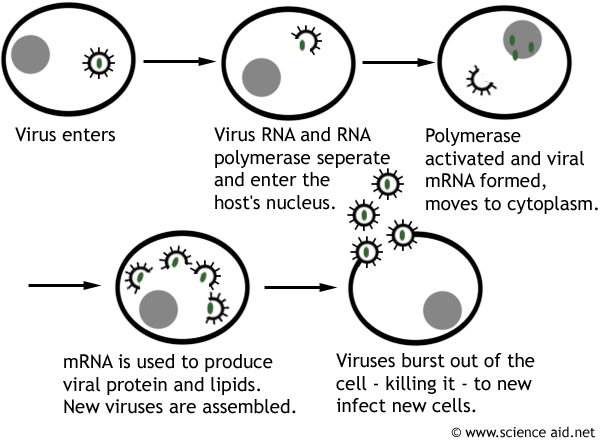 In summary: the virus is a piece of genetic material that uses host cells to create copies of itself, and by doing so, destroying the host's cells.

It's difficult to treat viral infections because they have no metabolism of their own, so antibiotics will not work; and it would be difficult to destroy the virus without destroying the host cell as well. Medicines given for viral infections will target symptoms, so aspirin or paracetamol.

The influenza virus can be prevented by vaccination, and every year governments target the elderly and those with relevant chronic illnesses (like asthma) to protect them. The vaccine changes every year to take account of the most likely strain of influenza that year. The jury, however, is out on their effectiveness.

Because of its effects, especially in Africa, preventing HIV spreading is a big issue. Safe sex means using a condom that prevents body fluids from being exchanged. Its spread among drugs users is prevented by offering clean needles to drug users - an approach that seems to have had some effect.

Thanks to all authors for creating a page that has been read 3,061 times.