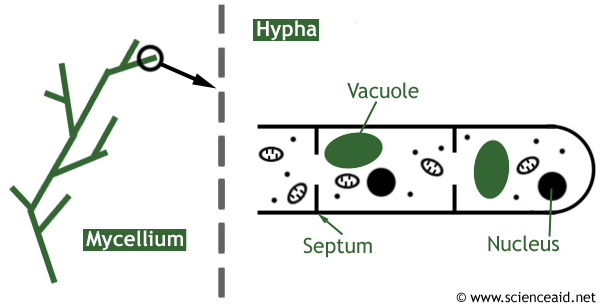 The diagram above shows a typical structure of a fungus. A fungus is made of hyphae, which are long tubes. Collectively they are called mycellium and form branches that can cover many acres.

On the right, we have zoomed in on a hypha, and you can see its structure. It has all the typical features of a cell, but there are some unique aspects. The hypha is a long tube and effectively one cell. However, it could be divided into compartments by septa; the hypha has many nuclei. The tip is tapered, this is where it is growing outwards and is known as the extension zone. Fungi grow specialized areas for reproduction called fruiting bodies. These can grow very large and are visible to the naked eye, where they are known as mushrooms. It is from these that spores are produced.

Yeasts are a type of fungi, but unlike most, they are made up of individual cells (unicellular). They reproduce by budding where little bits of new yeast grow and break off.

As a living thing, yeast respire. Unlike human anaerobic respiration where lactic acid is produced, they produce ethanol. Alcoholic drinks such are beer are made by fermenting with yeast, this produces alcohol.

As microorganisms, fungi can be pathogenic, fungi like warm and damp environments which they can find in places like between the toes and in the vagina. Have a look at the table below to see some examples of pathogenic fungi.

Fungi have many uses in the industry that are covered in various areas of this site. They are especially useful in food.

This is where digestion is done outside of the organism. This is seen in saprophytic fungus (saprophytic meaning decomposer). The fungi secretes the enzymes into their surrounding material and then absorbs the products. A way of measuring the activity of amylase is to have an agar plate with starch; make a small well and put in the amylase enzyme. Incubate for a time and then flood the area with iodine. It will show a clear zone where the starch has been digested. You can see which is the more effective in the diagram below.

Hi Jamie I was wondering about extracellular digestion in yeast?

Hi Jamie I was wondering about extracellular digestion in yeast and how this happens and what it means? It doesn't explain it.

Fungi is Yeast which feeds on dead organic material. Extracellular digestion is the way in which Fungi feeds. Fungi secrete enzymes through the walls of their fine feeding hyphae. This breaks the food down into nutrients. Once the nutrients are digested there reabsorbed through the hyphae wall. The nutrients are used in respiration to release energy, or they are used for growth.

Thanks to all authors for creating a page that has been read 6,694 times.