Below is a diagram of a cross section of a primary root. 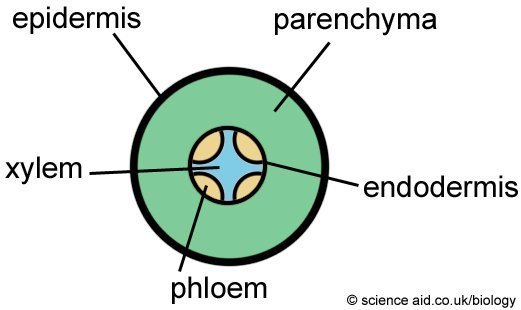 This is the process of transporting sugar and takes place in the phloem. This transportation is called the mass-flow hypothesis. 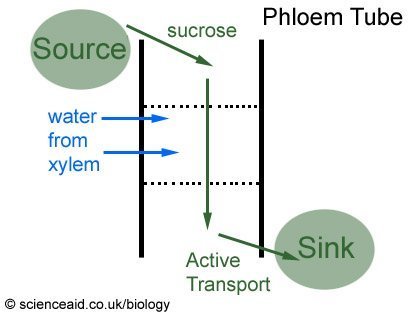 The source is where food is produced. This would be the leaves. They produce glucose which is converted to sucrose which enters the phloem. This makes the water potential more negative, making water from the surrounding xylem enter.

All of this extra material increases the pressure and forces the solution down and through the sieve plate. It then gets to the sink where the sucrose is moved by active transport into the parenchyma; where it is made into insoluble starch so the water returns to the xylem.

Therefore the solutes move from source to sink, but it is important to note that it can go in both directions. For example, at night when there is no light for the leaves to produce sugar by photosynthesis, energy has to come from storage.

Evidence for this theory comes from two sources.

Why can't the ringing experiment be performed in monocotyledon plants?

Who established the ringing experiment & why can't the experiment be performed in monocotyledon plants?"

The ringing experiment involves removing a selected part of a stem tissue in the form of a ring or a girdle. There are two types of ring tissues removed; one the phloem is removed only and the second one, the xylem is removed. Three plants are selected in the ringing experiment. The three selected plants are kept under sunlight to allow photosynthesis take place. Let the plants be Plant A, B, and C. After a short duration of sunshine, it is noticed that in plant B, the portion of the cut stem immediately bulges above the ring. On the other hand, plants A and C have no any sign of bulging. This works on the foundations of downward translocation taking place in the phloem as plant's B phloem was removed. Such instances didn't happen in plants A or C as the phloem was still intact. This suggests that the removal of xylem had no effect on the translocation as seen in A.

In the next experiment, a similar procedure will be followed showing the upward translocation also conducted through the phloem. The procedure starts with the removal of the xylem in Plant A, removal of phloem in plant B and control in plant C. The shoots in A and B are defoliated above the rings. The cut part is kept in glass cylinder which is filled with water so as to keep the tissues moist. In plant A, where only the xylem was removed shows the stem elongation. This shows that there was an undisturbed movement of solutes through the phloem. In plant B, there is no elongation seen. This indicates that the stoppage of solute flow in the stem was removed.

Tracer studies with the sap analysis which clearly shows that sieve tubes are the main structures in which organic materials translocate within the plant. This is the method used to determine translocation in plants. In tracer experiment, the main aim is to know the flow of sucrose. This procedure utilizes radioactive carbon dioxide where C is treated as 14C. Carbon dioxide which simply means in CO2 there is only one carbon and two oxygen atoms. The radioactive carbon dioxide is placed in a bag over the experimenting leaf and sealed. After a while, the carbon dioxide will be converted into glucose form where an X-ray is taken so as to show where the radioactive material has moved clearly.

Another experiment procedure is where a plant is grown in a lab and one leaf exposed to a carbon dioxide which contains radioactive isotope 14C. This 14CO2 is taken up by the plant during photosynthesis, and then the 14C is incorporated into sucrose and glucose. Later on, the plant gets frozen into liquid nitrogen so as to kill and fix it fast enough and then placed on a photographic film in the dark. The results show an autoradiograph outlining the compound location containing the 14C. The experiment shows how organic compounds are transported downwards from the leaves to the roots in a plant. The technique can be used to trace the ions, sugars or water.

Explain how organic substances are translocated in plants?

Mass flow, simply put, is the movement of matter of one substance through a designated channel. In plant physiology, this often includes the upward movement of water in the soil into vascular plant tissue. The general movement of materials from exchange surfaces to the necessary cells through the plants mass transport system is accomplished by mass flow.

What are the scientific methods to investigate transport in tracer and ringer experiments?

I have to write an essay answering this question but I am not able to find enough information to complete the essay.

Can you provide me with some examples that disprove the theory of mass flow, please?For example, some experiments or methods that can be used to say that mass flow theory is incorrect.

The pressure flow hypothesis or mass flow theory was established by Ernst Munch in 1926. As indicated by the title, the theory is still considered a theory or hypothesis and has not yet been established as a scientific law. As with any theory or hypothesis, there is definitely room to disprove the theory. Many scientists have done experiments to try and disprove the theory. One of the most explanatory disproofs was written by Mathis in 2011. This paper can be accessed here: http://milesmathis.com/xylem.pdf

Mathis explores several areas of the theory that he considers questionable including:

If you read Mathis document in the link presented, you will find in-depth explanations and explorations in the disproof of mass flow theory.

APA (American Psychological Association)
Roots and Translocation: Structure of Roots, Process of Translocation and Evidence for it. (2017). In ScienceAid. Retrieved Nov 29, 2022, from https://scienceaid.net/biology/plants/translocation.html

Chicago / Turabian ScienceAid.net. "Roots and Translocation: Structure of Roots, Process of Translocation and Evidence for it." Accessed Nov 29, 2022. https://scienceaid.net/biology/plants/translocation.html.

Thanks to all authors for creating a page that has been read 24,651 times.