What is Cation Testing?

A flame test can be used to identify a compound using a flame. The procedure is as follows: 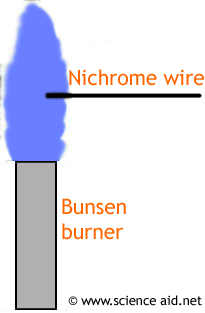 These are the colors you will see for different ions:

Add several drops of sodium hydroxide (NaOH) solution to the solution being tested. If a colored precipitate is formed then stop and find out what the cation is. If white precipitate forms then continue to add NaOH to it and observe whether the precipitate dissolves.

The ionic equation for these reactions are all very similar, here is an example it with Aluminium:

In order to test any other ionic equations, to change the number of OH- ions so that it balances with the oxidation state of the metal anion. E.g. Iron (II) would need two OH- whereas Iron(III) needs 3.

Why do cations form and how do we tell by the color?

How do we know by the color of the precipitate for which cation it is, is it the bonds

First I would like to explain why cations are formed. Before that, you have to understand the atomic structure. Atomic structure is similar to that of the solar system. In place of the sun, there is a nucleus where neutrons (neutral charged) and protons (positively charged) are present. Electrons orbits around the nucleus like planets. Shell is like layers covering the nucleus. In each shell, there will be a certain number of electrons. In the first shell there will be two electrons and in the second shell there 8 and in the third again there is 8 and it goes on as the atomic number increases. A shell is complete when all the electrons are filled.

Similarly, in chlorine atom, Cl needs one electron to make in outer shell complete, hence it gains electron easily. When it gains an electron, its charge reduces to -1 due to the presence of one extra electron

For your second question, you should know about transition metal in the periodic table. Transition metals are colored which is its fundamental property.

I am looking for the Cation test which uses HCL, are you able to tell me what it is?

Hi Jamie, I am looking for the Cation test which uses HCL, are you able to tell me what it is?. Thanks. It will help a bunch

Take the example of Fe

What is the theory behind how cation and anion tests work?

What is the theory behind cation and anion tests and what are some chemical equations used to show how it works? Thanks. The article does not go into detail into how the cation and anion tests work on a chemical level. I have tried: Googling more and looking in textbooks. Looking back at coursework. I think it was caused by Difficulty finding enough information. Not many people have told about how it works in theory

Colors are produced by the transition metal, which is its inherent properties.

The other cause for producing colors occurs at the atomic level. For example, when you heat a metal, electrons are excited due to gaining of energy. When they return to the normal state, gained energy is release out. This released energy sometimes will be in the visible range of light spectrum. Colors are produced according to that of the wavelength of energy released.

NaOH + Ca(2+). Will the reaction fprm a precipitation?

Here is an example of Balanced Equation

Problem with distinguishing between lead and aluminum both of which are colorless solutions?

How do you differentiate between aluminum and lead ions using the sodium hydroxide test. Both give you white precipitates that redissolve when more sodium hydroxide is added. Can you use a flame test to distinguish the two? Flame testing is generally used for alkali metals such as Lead. The flame test used on lead will produce a gray/white flame.

I want to know the advantages and disadvantages of using dilute acid to test for carbonate?

It's a chemistry related question, most about inorganic unknowns. I have searched and searched but I can't find it, I need the answers asap please because it's not included in the article

When using dilute acid to test for carbonate or carbonate materials, hydrochloric acid is added to the rock or mineral. The release of carbon dioxide and the forming of bubbles denote the presence of carbonate materials. The main disadvantage of this test is the variance in the bubble formation - it can happen very fast and being very identifiable or it may occur slowly and need magnification to observe. The ubiquitous nature of calcite can also lead to confusing results with this test.

The solution used to test for cation largely depends on the type of component you are testing for. There are three types of solutions for testing: Sodium Hydroxide, Ammonium Hydroxide, Sodium Carbonate. The solution used is dependent on the cation or component you are testing for. The flame test is generally used when testing alkali metals, while transition metals form differing precipitations when a solution is added.

Can sodium hydroxide to identify other metal cations than the ones mentioned on the table?

How to identify washing soda from caustic soda by using vinegar and lemon juice?

Two bottles of soda were left on a shelf in a garage their labels were half torn so the only word soda was still intact. one was washing soda and the other was caustic soda, how would test to know which one is which?

To identify the bottles, you want to create a reaction using the vinegar or lemon juice. When you add vinegar to washing soda (NaC03) the reaction is as follows: Na2 CO3 + 2 CH3COOH = 2 CH3COONa + CO2 + H2O.

Explain the scientific principles behind the tests used to identify chemicals?

Please see the newly added section "What is Cation Testing" in this article.

Is there any easy way in memorizing the tests for cations and anions?

See more questions like this: Why are aqueous hydroxide ions used to test for cations?

Please help me know what will happen on the flame test for cations. I need cations in flame for Nacl, Sr(NO3)2, Cu(NO3)2, KNO3. Thank you so much. It says that obtain a few crystals of table salt on the tip of a clean scoopula and place the tip in the flame of a bunsen burner under the hood. Elements have characteristic colors when placed in a flame. Test strontium nitrate, copper (II) nitrate and potassium nitrate in the same manner as the sodium chloride to see the color of flame produced by each of these cations. Some of these compounds are used in firework productions. Record your observation. It just shows the procedure of how to do it, but the results are not in there. They used other cations in the experiment so that is why the answers that I am looking for is not in there. I have tried: Nothing actually. I am afraid to touch or start a bunsen burner because I have a trauma of it. I think it was caused by: Because I am afraid of fire. I had burned myself before through flames so it is not easy for me to work with a Bunsen Burner.

I'm studying for the chemistry IGCSE and there is a point I have no clue about?

Is there a trend with adding NaOH to Period 3 elements?

I have recently done the AQA 2017 A-level Chemistry Paper 1 past paper (Inorganic and Physical) to revise. In the paper, I was asked to identify one simple test-tube reaction to distinguish between aqueous solutions of magnesium chloride, MgCl2, and aluminium chloride, AlCl3. The answer was to add NaOH and see how both produce a white precipitate but only the AlCl3's precipitate would dissolve in excess NaOH. As I have never really come across this before, I was wondering if you could explain the trend with adding NaOH to Period 3 chlorides and other metal ions please, such as if they produce different coloured precipitates or if they react differently and why. For example, why does the AlCl3 precipitate dissolve with excess? I would very much like to know the role of the OH-. Thank you very much in advance. It involves the testing of metal ions not shown in the tables and further explanation. I have tried: My Chemistry A-level textbook and other websites, I feel this is a great place to find the answer. I think it was caused by: Having to apply reactions to other scenarios and apply trends to different groups

Thanks to all authors for creating a page that has been read 108,146 times.