Bonding occurs between metals and non-metals like our friend sodium chloride. The reaction can be represented as follows, showing the electron arrangement, shown in the full form below: 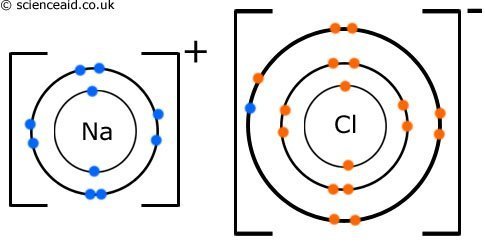 Electrons are transferred from a metal to a non-metal, forming two oppositely charged ions. Both have the electronic structure of a nobel gas. The ionic bond is the electrical attraction between these two ions. The ions do not work on a 2D basis. They can attract oppositely charged ions in all directions, thus making a huge ionic lattice. In NaCl, each cation is surrounded by 6 anions and vice versa. However, depending on the size of the ions, more or less can surround it. 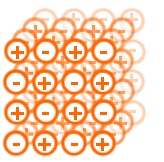 The properties of giant ionic structures are as follows.

In reality, no compound has 100% ionic character where there is a complete transfer of electrons. Between the two extremes of ionic and covalent bonding, is a world in between known as polarization. The degree of polarization in ionic compounds is determined by the charge density of the cation (positive), and how high the negative charge of the anion is. The charge density is high if the cation is small but at the same time, it has a high positive charge. 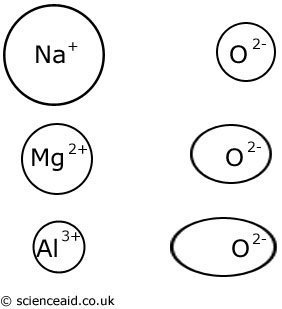 As you go across period II, the charge size increases and so does the ion charge. So the charge density increases until Al which has a very high charge density. As you can see in the above representation, the Al3+ will distort the electron cloud more and thus have a greater polarization effect.

Covalent bonds make molecules, and form between non-metals. It is formed when electrons share a pair of electrons rather than transfer them. A good example of covalent bonding is water: 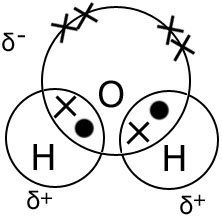 Covalent bonds have the following properties...

Covalent bonds can be categorized as either polar or non-polar. In a non - polar molecule, the electrons are shared equally because the atoms have similar electronegativities. In a polar molecule, there are quite different electronegativities. Water (above) is polar. The oxygen molecule is more electronegative so the electrons are unequally shared and shifted toward it. This makes oxygen slightly negative. This is represented by the symbol δ- delta minus, and the hydrogen atoms are therefore both δ+. This molecule is a permanent dipole. There are also dative covalent bonds (or co-ordinate bonds), when the shared pair of electrons comes from just one of the atoms. It is represented in diagrams using an arrow, showing the direction the electron pair is denoted.

As the name suggests, this type of bonding is between metals. In this type of bonding many positive metal ions occupy a fixed position in a lattice (a bit like ionic). Its outer electron energy level becomes delocalised, creating what is known as a sea of electrons since they are not fixed and free to move throughout the lattice. 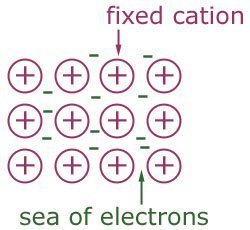 The metallic bond is the electrostatic attraction between the cations and delocalized electrons. This bond is very strong. And below are its properties and explanations for why they are so.

Why are electrons in metallic bonding referred to as "delocalized"?

Thanks for helping understand this. Can you also tell me the properties of metallic bonding and how atomic and electron arrangement reflects the property? I couldn't find the answers in the website. the picture are a bit to big. I have tried: Yes I saw other websites. I think it was caused by: I don't know

The reason the metallic bonding is referred to as 'delocalized' is because of its free electrons that are circulating around the positively charged nuclei. Electrons, for any element, are located in the electronic cloud of the atom and orbit around it. In metals, some of the electrons at the s and p orbitals delocalize and move closer to the positive nucleus. This characteristic allows the metals to react more freely with other metals to form alloys and to conduct electricity in a better way.

Thanks to all authors for creating a page that has been read 1,260 times.