Aldehydes and ketones are formed by the oxidation of alcohols, as summarized in the diagram below. The further oxidation of an aldehyde to a carboxylic acid is the basis of the Fehling's and Tollen's tests, since an aldehyde can be oxidized and a ketone can not. 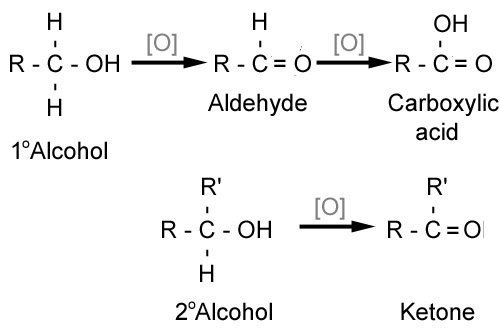 It is also possible for us to go backward, by reduction. The C=O bond is polar, so the carbon becomes δ+ which means it can be attacked by a hydride ion (H-) that is supplied by reagents such as Sodium tetrahydroborate (NaBH4). The mechanism for reducing an aldehyde to a primary alcohol is shown below.

Also, the same mechanism of nucleophilic addition applies to the addition of cyanide. Instead of an H, there would be NC:-. This reaction can form a racemate because an attack by the cyanide nucleophile could occur on either side of the planar C=O bond.

There are two simple tests you can use to distinguish between an aldehyde and ketone; either Tollen's reagent or Fehling's solution; the two tests are outlined below.

Brief Note: Primary and secondary alcohols can be dehydrated so the OH group is eliminated and the molecule becomes an alkene.

A carboxylic acid has the same functional groups as a carbonyl (C=O) and an alcohol (C-OH), however, they are both on the same carbon, which means they have different properties from either. Therefore, it is a distinct homologous series with the functional group COOH.

If a carboxylic acid reacts an alcohol in the presence of a strong acid catalyst, an ester is formed. The esters are another homologous series that have the general structure shown below.

Many people have trouble naming esters, but if you know the basic rules of organic nomenclature, it should be easy. The part highlighted in red comes from the carboxylic acid and is suffixed with -oate; for example, ethanoic acid becomes ethanoate. This is the part that has a carbonyl group. The alcohol contributes the other part. This bit is named in the same way all side chains are. Ethanol becomes ethyl and the molecule is ethyl ethanoate.

Esters often have pleasant smells. For example, ethyl pentanoate smells like apples. Because of the pleasant smells, one of the uses of esters is in food flavoring. Other uses include as solvents, for example, ethyl ethanoate is used as a solvent in glue. Esters can also be used as plasticizers, these are chemicals that are added to polymers (plastics) to make them less brittle.

Esters can be hydrolyzed in the following reaction.

For example, the following is the reaction of ethyl ethanoate with sodium hydroxide.

It is by this hydrolysis reaction that soaps are made. Since fats are esters, fats are boiled with an alkali which produces a 'fatty acid' and a carboxylate salt which is what we call the soap.

Acyl chlorides and acyl anhydrides (see nomenclature) are commonly used in chemistry as intermediates. Below is the mechanism scheme for the reactions of acyl chlorides with a nucleophile which is a substitution-elimination reaction. In order to make it easier to understand it has been generalized, however, have a look at the individual mechanisms for the general form to be useful for you. 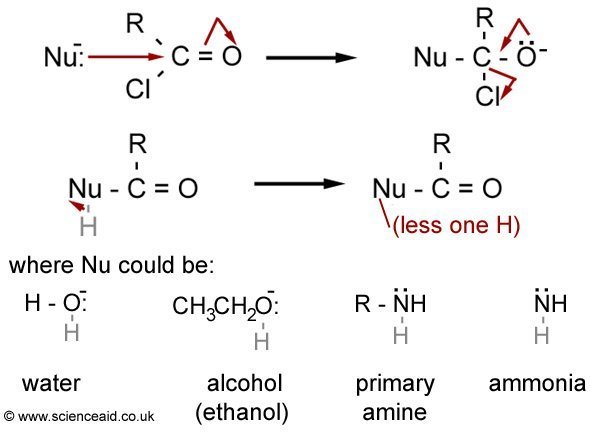 In industrial chemistry. ethanoic anhydride is more commonly used than ethanoyl chloride, for example, in the manufacture of aspirin. This is because it is cheaper, less reactive, thereby making the reaction easier to control; and HCl is not produced.

Would like to know the effect of adding Fehling's to a carboxylic acid (I believe the teacher may have got confused), and just to confirm, Fehling's in the presence of an aldehyde turns the solution red right?

Fehling's solution is blue in color and contains copper (II) ions in alkaline solution. When it is added on an aldehyde and warmed gently, dark red precipitates are formed made of carbon (I) oxide, showing that the aldehyde reduces the copper (II) to copper (I). Since the medium is still alkaline, then the aldehyde is oxidized to the salt of the carboxylic acid to which it corresponds.

Which carbonyl compound won't give a positive Fehling's test?

The Fehling's test will not give a positive result when testing aromaticaldehydes. When testing these compounds, Tollens' reagent must be used instead.

Thanks to all authors for creating a page that has been read 2,859 times.