The properties and similarities in transition metals comes down to their electron configurations. The 3d sub-shell is closer to the nucleus, but higher in energy than the 4S; meaning that 4S fills up first (giving K and Ca). Therefore we define transition metals as those that have an incomplete d sub-level: in the element form or one of its ions. There are exceptions that arise as a result of this definition.

The various common properties of transition metals are outlined in this section, and are: coloured ions, variable oxidation states, and catalytic activity.

Because the 4S and 3d energy levels are so similar, the transition elements can lose differing numbers of electrons and have a similar stability. This means they have variable oxidation states. Vanadium has 4 oxidation states (+2, +3, +4 and +5). These can be seen as 4 distinct colours when zinc is added to acidified ammonium vandate (V). 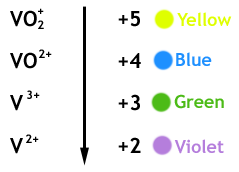 Similarly, chromium ions show different colours according to the oxidation state, when Cr2O72- is reduced in solution by zinc.

Oxygen from the air can act as an oxidizing agent on many compounds such as Co(OH)2 to Co(OH)3. The ions can be protected from this by acidification. If ammonia solution is added to cobalt (II) salt, the precipitate Co(OH)2 is formed. If shaken it will oxidize to Co(OH)3, which is brown.

Substances can also be oxidized in alkaline solution. For example, adding excess of NaOH to chromium (III) salt gives the chromate (III) ion. Now when this is treated with hydrogen peroxide it is readily oxidised to chromate (VI) ions.

Titrations are important in analyzing solutions. For example, testing the amount of iron in an iron tablet. This can be done by reacting Fe2+ with either MnO4- - manganate (VII) or Cr2O7- - dichromate (VI).

Now take a look at the worked example below to see how to perform calculations given this information. 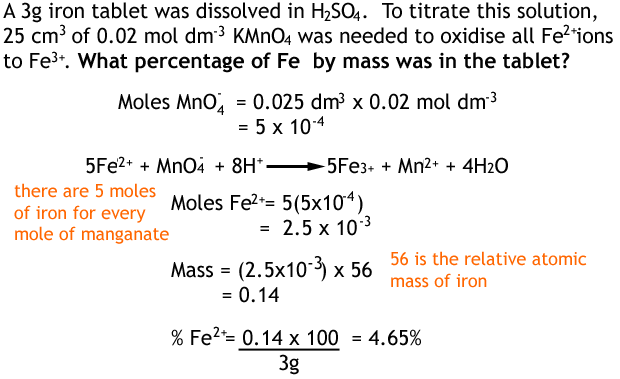 If potassium dichromate is used instead, an indicator must be used, this is commonly sodium diphenylamine sulphonate. The overall reaction for this is.

Thanks to all authors for creating a page that has been read 273 times.