Benzene is a molecule that has the formula C6H6. The chemistry relating to it is called aromatic because many fragrant substances contain this structure. Benzene forms a ring as follows.

The carbon atoms are bonded in a ring with a single hydrogen bonded to each. However, this means that each carbon only has 3 bonds. The fourth bond is the pi bond, which is delocalized in the ring. All of these delocalized electrons act like a glue which makes the ring stable.

If the enthalpy of hydrogenation of cyclohexa-1,3,5-triene is three times that of cyclohexane, then the enthalpy is -360kJ/mol. So the hydrogenation of benzene releases 152kJ less energy per mole to reach the same point, and hence it is more stable. The benzene molecule is susceptible to attack by electrophiles (i.e.. positively charged species). This results in an intermediate where the delocalized ring is disrupted, which then regenerates: resulting in a substitution reaction.

The nitration of benzene has the above overall reaction. This process is important in producing amines and also explosives. An important feature to note is the generation of the electrophile, as the nitric acid does not directly react with the benzene, rather the ion: NO2+ does. This ion is generated by the reaction of nitric acid with the catalyst: sulphuric acid in the following reactions.

The reaction of this electrophile with benzene is represented by the mechanism below. This is the same mechanism for any electrophilic substitution of benzene, you simply need to replace the nitronium ion with the relevant electrophile. 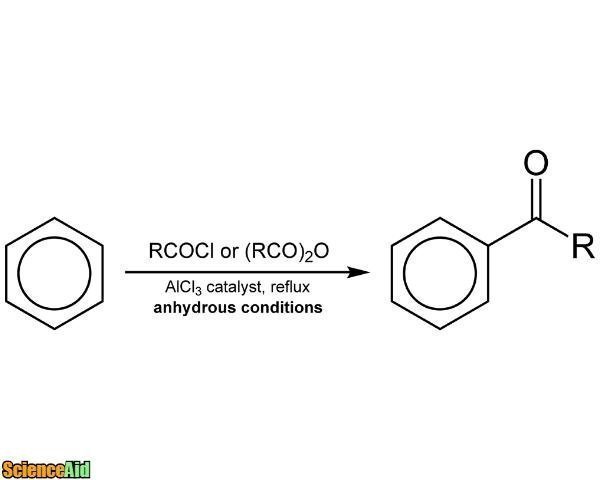 The Friedel-Crafts alkylation and acylation are two reactions of electrophilic substitution of benzene that use an AlCl3 catalyst to generate an electrophile from either a haloalkane or acyl halogen. The mechanism with the electrophile is the same as shown above with nitronium; but the following occurs to generate this electrophile.

The molecule ethyl benzene is required in the manufacture of polystyrene. However, using Chloroethane would be too expensive. So first of all, ethene is protonated with HCl in the following reaction.

The remaining chloride ion then reacts with the aluminum chloride catalyst to make an anion.

Thanks to all authors for creating a page that has been read 2,803 times.