A polymer is a large molecule made up of lots of small molecules. In the natural world, fats and proteins are polymers. A monomer is the name for the small molecule that is part of the chain, in the following example, the monomer is ethene.

The monomers are passed over a heated catalyst and polymerization occurs. In this example a long chain of molecules called poly(ethene) or polythene is made.

NB: The molecule in square brackets shows the structure of each monomer, and the lines coming out show how they are bonded to each other. The letter n denotes that the sequence is repeated many times.

Addition polymerization is the creation of polymers from monomers containing a C=C bond. As the name suggests it is an addition reaction, and is written as follows: 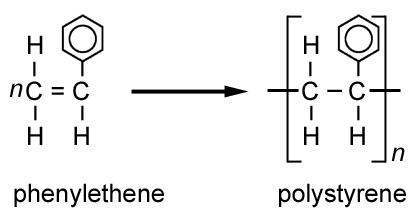 Condensation polymers are formed by the reaction of molecules with two functional groups, and produces water as a by-product.

Unlike addition polymers, polyamides and polyesters are biodegradable and can be broken into their constituent molecules by hydrolysis, where water is added to the polymer.

Polymers are very useful, and are used to replace traditional materials like metals, paper and rubber. The following table shows some other polymers along with their uses.

Thanks to all authors for creating a page that has been read 977 times.