To explain this concept, let's take the example of a sky diver. 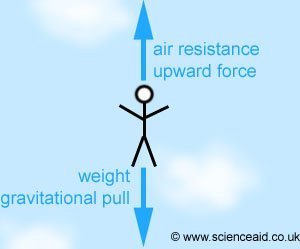 The two forces balance and the diver falls at a constant speed called terminal velocity. He will not get any faster.

Science Aid.net does NOT advise sky diving without a parachute!

When a force is applied to a rubber band or spring it changes shape.

Thanks to all authors for creating a page that has been read 405 times.