The Solar System: What is it; Big Bang Theory; Future

The solar system includes everything that orbits our sun. As well as the 8 planets, there are satellites, asteroids, comets and, dwarf planets. The image below shows planets in their order from the sun. This is not to scale but the relative sizes of each planet is accurate if you double the gas giant's diameters. 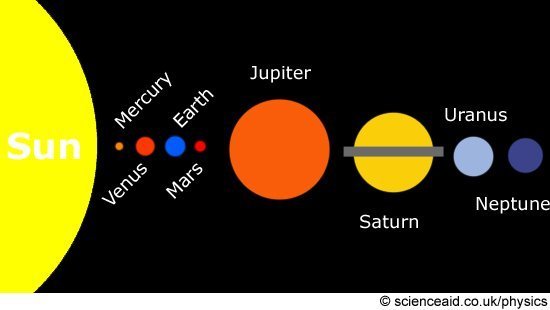 Also part of our Solar System is the asteroid belt. This is an area between Mars and Jupiter that contains many thousands of asteroids. Asteroids are large pieces of rock, ice and metal that combines are estimated to be 4% of the moon's weight.

Also floating around the solar system are Dwarf Planets. This is a new classification that was introduced in 2006. There are 3 dwarf planets in our solar system.

As you will undoubtedly know, gravitational pull is a force that means apples fall to the ground and don't float and that we can stand. However, Earth is not the only planet that has gravity. In fact, everything in the universe has a degree of gravity pulling things towards it. So why don't we bump in to each other? The amount of gravity something has depends upon its mass. The Earth (which is pretty large) exerts an enormous amount of gravity, and therefore, the moon, which is smaller than the earth, is held in the Earth's gravitational pull. On the other hand, the biggest planet in the solar system (Jupiter) has a mass 11 times that of Earth, and so its gravitational pull is 11 times greater. This means any human would be crushed if we were on the planet.

Comets consists of dust, ice and carbon dioxide. They also orbit the sun, but the orbit is elliptical. The diagram below outlines how the comet orbits the sun. 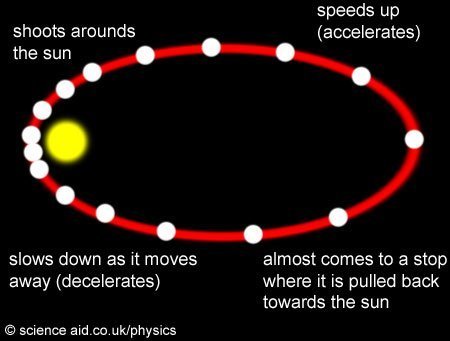 Put your finger on the screen over the diagram, trace the comet's path by speeding up towards the Sun, until it is catapulted away from the Sun. It then slows down until almost stopping at the right, then the orbit turns and the comet speeds up as it approaches the Sun again.

Following this orbit you will see that the comet spends the majority of its time outside of the Solar System, and it's for this reason that astronomers are so interested in comets: because they only can be seen periodically. The most visible and therefore famous comet is Comet Halley. Halley's Comet, as it's commonly referred to, appears in the solar system every 75 years. It has been mentioned in historical texts for the last 3000 years. An important feature of the comet is the tail. This is dust and gas produced by the heat from the Sun. The tail is always pointed away from the Sun.

APA (American Psychological Association)
The Solar System: What is it; Big Bang Theory; Future. (2017). In ScienceAid. Retrieved Jun 25, 2022, from https://scienceaid.net/physics/space/solarsystem.html

Thanks to all authors for creating a page that has been read 1,028 times.