If you are shown a face, you might be able to give it a name straight away, but other times, although you know things about the person, you can't name them. The following terms are used to describe varying degrees of recognition:

For the purposes of Psychology, and especially the law, we need to know how faces are recognized; and once we know this then eyewitness accounts of what a suspect looked like, could be improved.

This is the first theory of face recognition. As its name suggests, you look at individual parts or features (nose, mouth, hair) of the face when trying to recognize or describe it. It is known as a bottom-up theory because you look at details first, and then the entire picture.

Below is the key study for this theory, it is by Shepherd, Davies, and Ellis (1981).

This theory says we look at the face as a whole (i.e. spacing, overall shape), including stored information related to it. For example emotion (which is important when recognizing a friend or relative). It is said to be a top-down theory because you look at the bigger picture first.

Our key study for this theory is by Young and Hay.

Here, a famous experiment called the Thatcher illusion has been recreated, but using another former Prime Minister: Tony Blair. What differences do you notice between A and B 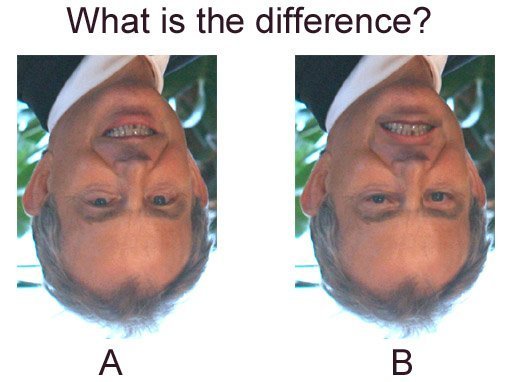 However, when you look at the images the correct way up; it becomes much more obvious what the difference is. 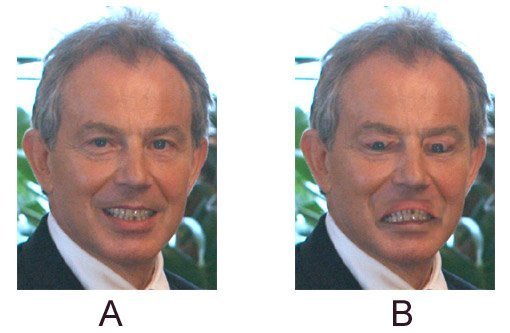 If you don't believe they are the same picture then just turn your head upside down! This suggests that faces are in fact viewed holistically because you do not detect that the eyes and mouth are inverted the first time around.

The general opinion in contemporary Psychology nowadays, is that the holistic form theory is the most appropriate. Since it takes account of, not only how we look at the face physically, but also the emotional response. This makes sense when looking at face recognition disorders.

Capgras Syndrome is caused by brain damage and sufferers recognize a familiar face but have no emotional response to it. This can make them believe their relatives are impostors. Indeed Blount (1986) cites a case when a man slit his father's throat because he was convinced he was a robot and was looking for the wires.

So in conclusion, and using evidence like the Thatcher illusion, Thompson (1980). We can say that there is a greater amount of evidence to support Holistic Form Theory as opposed to feature analysis.

Thanks to all authors for creating a page that has been read 2,758 times.