Home ground advantage is defined as: the constant finding that home teams in sports competitions win over 50% of the games played under a balanced home and away schedule.

Here are some factors that cause "home ground advantage".

However, sometimes being at home is a disadvantage. This is an affect known as championship choke. It was based on archival and historical research by Baumeister et. al., looking at the basketball world series. They found that in the last games of the championship, the home team won the minority of games at home. Below is a laboratory study by Butler & Baumeister into this.

Team cohesion is a tendency for a group to stick together and remain united in the pursuit of common goals. It can be divided into two types.

Team cohesion is affected by various factors, including:

All of this theory may be slightly useful for team captains, but now we look at the one thing that all teams strive for: success!. Does good team cohesion lead to success, and does success lead to cohesion? Martens and Peterson (1971) proposed a circular model to show how success, satisfaction and performance relate. 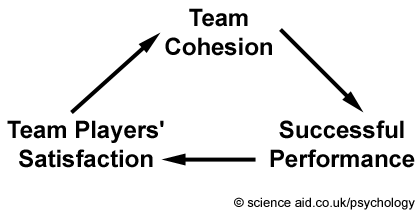 There is no real reason why the arrows should go that way round; they could just as easily go in the other direction as well. The two studies below provides evidence for these two views.

As you will have learned by studying social facilitation, the types of sport are an important factor. Cox (1990) suggested sports should be categorized into:

This tells us that high team cohesion in a low interaction sport have poorer performances. This term is used because the performance is not reduced, it is just not as affected.

Thanks to all authors for creating a page that has been read 979 times.