Sound waves are longitudinal waves and can be reflected, refracted and diffracted - like all waves. They are mechanical vibrations of particles that can be detected by the human ear. When a sound wave is reflected, we call it an echo. Echoes of ultrasound are used by bats and sonar, to detect the position of things.

A sound wave can be represented as a sine curve; by altering its amplitude and frequency, we can change the sound. 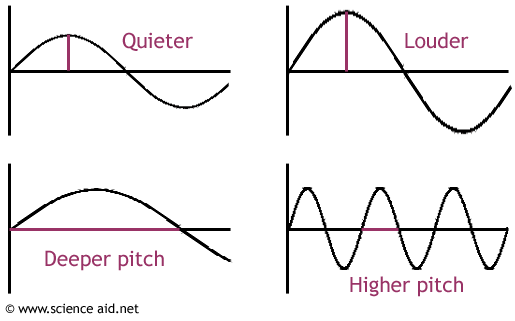 If the amplitude is increased, the sound becomes louder - a higher volume. If the frequency is increased, you get a higher pitched sound. Humans can only hear sounds that are in a certain range of frequencies. This is generally 20 to 20 000 Hz, but perception of sounds at the upper end are reduced with age. As we age, men lose the higher frequencies, and women lost the lower frequencies of their hearing (Fletcher Munson Curve). Sounds that are above 20 000Hz are said to be ultrasonic.

Ultrasound has many uses, and here we will look at SONAR and medical imaging. Sonar stands for 'sound navigation and ranging'. In it's simplest form, it can be used to calculate the depth of the sea. This is done by emitting an ultrasonic pulse, this bounces off of the sea bed as an echo, and the time taken for it to return is recorded. Using (speed = distance/time) it is possible to calculate the distance, the example below. 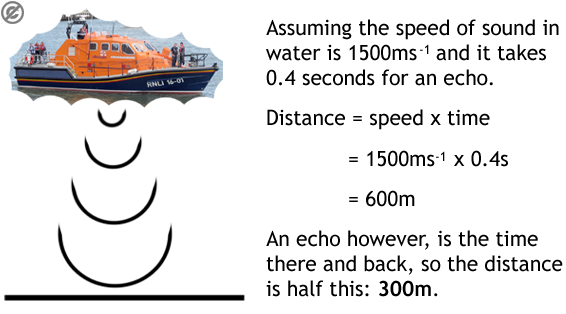 Ultrasound is also used in medicine for ultrasound imaging. This works using echoes of ultrasound to create a picture of the inside of the body. It is preferable to other methods because it doesn't result in any radiation that can damage the cells, the way x rays do. Below is an example of an ultrasound image from medical imaging, below is a picture of a fetus.

N.B. sound that is below the range of human hearing is called infrasound. It is the range of frequencies detected by seismographs for detecting earthquakes. These waves can cover long distances with little obstacle.

Thanks to all authors for creating a page that has been read 573 times.