The Social Learning Theory was proposed by Bandura as a way of explaining how children acquire their gender identity based on the influence of other people (particularly their parents).

There are four stages that a child goes through when develop gender behaviour. These are:

There are also some factors that will affect the chance of behaviour being modelled i.e. things that make someone more likely to copy what someone else is doing. The appropriateness of the behaviour. For example, Bandura (1961) found that males would imitate aggressiveness from another male, but not copy the behaviour if a female did it. In short, someone is more likely to imitate a behaviour they think they should perform. Also, there is relevance of the model to yourself. So a girl will be more likely to model someone with similar characteristics to her, like another female. And the same would be true for males.

The following is a pair of studies that appear to show that gender behaviour is learned socially. Both are pretty memorable so you won't have much difficulty recalling them in an exam situation. 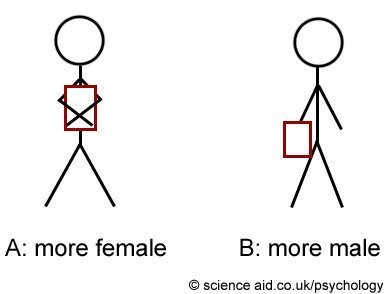 What is the social learning perspective on gender differences?

Biological Determinism being a theory that psychological, social and behavioral traits were a result of metabolic state meaning women being (anabolic) men being (katabolic). These traits were used as an argument to omit women from political and social issues.

There have been numerous theories on gender differences but one must hold the notion that these are only theories and nothing more. One of the most notable was a study conducted by [Maccoby and Jacklin] in 1974.

Thanks to all authors for creating a page that has been read 13,043 times.