The Plasma Membrane: Gateway to the Cell

Discovery of the Structure of the Cell Membrane

Structure of the Cell Membrane

Cells are separated from the external environment by a thin but complex structure called the plasma membrane (also known as the cell membrane). The cell plasma is crucial to the life of cells because it helps to keep the intracellular conditions balanced, a state called homeostasis. This balance is achieved through a series of mechanisms that control what enters and leaves the cell. The plasma membrane is elastic and allows unicellular organisms to move.

Figure 1. A simple view of plasma membrane.The blue and purple spheres represent Phospholipids, the cholesterol are the small yellow ovals throughout, the chains protruding from the top are carbohydrate chains, glycoproteins, and glycolipids while the large green ovals represent globular proteins.

Discovery of the Structure of the Cell Membrane

Figure 2. Evidence for the Davson Danielli model. You can see what Davson and Danielli saw including the three layer structure containing one layer of phospholipid and two layers of protein.

Structure of the Cell Membrane

The plasma membrane is made of two layers of phospholipids with hydrophilic (water loving) polar heads and hydrophobic (water-fearing) non-polar tails making the membrane "amphipathic" and selective in what crosses. The lipid bilayer allows fatty molecules pass easily but does not allow polar molecules to pass (semi-permeable membrane). Ions, hydrophilic molecules larger than water, and large molecules such as proteins do not move through the membrane on their own but have special transports that allow their passage through the membrane. 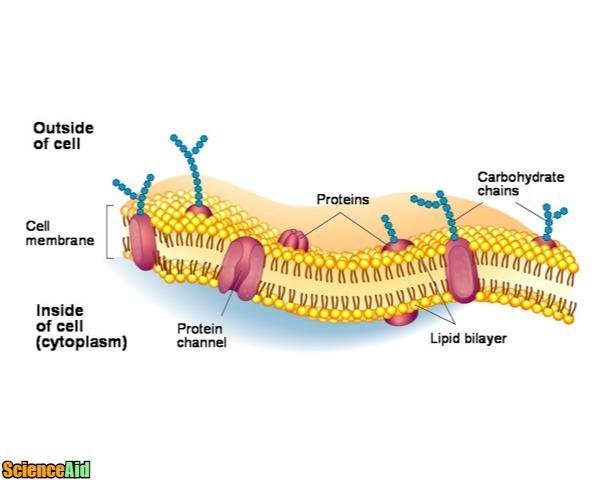 Some proteins function as transporters, allowing the cell to exchange molecules with its environment, while others are used to receive messages from the extracellular environment into the cytoplasm, termed receptors. Enzymes specialize in the catalysis (acceleration) of chemical reactions that occur inside the cell. Some proteins amplify the signals inside the cell, working as transducers and other proteins give support to the cell by anchoring to the cytoskeleton.

Plasma Membranes have several important functions other than cell permeability including *Protection: Retain the cellular elements inside the cell.

The plasma membrane is a complex and dynamic structure that allows the cell to perform all the functions necessary for its survival, such as moving, taking nutrients from the extracellular environment, eliminating toxins and unnecessary elements.

Thanks to all authors for creating a page that has been read 1,049 times.