Materials which conduct electricity are metals (iron, copper, aluminum, etc.) and also carbon - in the form of graphite. All other types of material are electric insulators. meaning you cannot pass an electric current through them, however, these insulating materials (like plastic) can be charged by friction. This is because the material is either losing or gaining electrons. The electrons will go from one item to another.

This charging of insulative materials can be seen every day. For example, when you pull your sweater over your head and hear the familiar crackling, and your hair ends up standing on end - all because your hair has rubbed against your sweater. You can also get shocked by the rubber handrail of an escalator, even though rubber is an insulator because it has gradually become charged from the constant motion creating friction. The diagram below shows how electrons are transferred when you rub a balloon against some fabric. 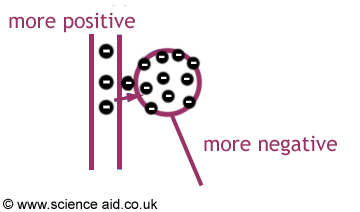 This electrostatic charge can have some serious repercussions. When an aircraft is being refueled, the friction causes charge separation: where the aircraft has an opposite charge to the fuel. If the voltage becomes high enough it may cause a spark. Igniting the fuel and causing a fire.

To prevent the framework from building up charge, it is connected to earth (also called grounding or ground), so that any charge can disperse, and fire is prevented.

As well as dangers, electrostatic charge has many uses. A common one is in painting metals to create a smooth, even spread of paint. As paint comes out of a nozzle it is positively charged. This causes the droplets to separate and spread out because like charges repel. The metal plate is earthed (grounded), and electrons flow from earth causing it to become negatively charged. The paint is attracted to the metal because opposite charges attract so there is an even coverage.

What exactly is the fundamental constitution of an "electrical charge"?

Hello Jamie!. I am not a scientist by any means but have a deep and long interest in the subject (I am 76 years old). "Electric charge" has been measured, calculated, parsed, and every sort of calculation made of its behavior, size, source, expectation, etc... but when we get down to its fundamentals there still is no description of what it is! Saying it is either + or - is not a definition, nor are any of these other measures. What exactly is a charge? Neither do we have a fundamental definition of what an electron is. Or a quark for that matter. Saying it is a "point particle" tells us nothing except perhaps about its size. Saying it is at the center of a field of some kind seems to me like a cop-out. Are we to be relegated to define these fundamentals as some mystical manifestation? In 2017? What IS a "charge?"

Charge is a physical property of matter, what exactly it means?

Is there some kind of influence around a charged particle, in that influence is there some pull or push ( force exerted) within the influence with varying intensities, greater near the particle and less away from it. What is the difference between the static electric charge and moving charge? How is an electric force created by this charge? Is the electric force the addition of the number of charges?

Thanks to all authors for creating a page that has been read 142 times.