Evolution explains how living organisms change to suit their environment. This has become a topic of debate in the USA because of the 'intelligent design' theory.

Evolution claims that small variations in living things may produce a more desirable characteristic that enables it to survive better, and so will be able to reproduce more, passing on this variation to our offspring. With this variation, the offspring will also live longer, and so reproduce more. Those without the variation have a lesser chance of survival, and eventually, all of the species has this trait, because the ones without it, did not survive. Accumulated changes eventually lead to new species being formed.

Within a species, there may be significant variations. With humans, for example, there are differences in height, body shape, intelligence and so on. Some of the many differences may give an organism a selective advantage. This means they will be more likely to survive and hence pass on their good genes to the next generation.

As an example, we'll look at the Peppered Moth (Biston betularia). There were two varieties: one that was light and one dark. The light colored moths were camouflaged when they were in the trees they lived in, and the dark colored variety was more easily seen and hence eaten. Therefore, there were far more light colored moths. Being dark (melanism) was a mutation that occurred randomly in this species, however, during the industrial revolution, the trees they lived in became dark with pollution, and now the darker moths were better camouflaged and the lighter moths were consumed more easily. The diagram above graphically illustrates how the darker moths become more numerous, and that the lighter moths are more likely to die. This eventually lead to the light moths being extinct in the cities. 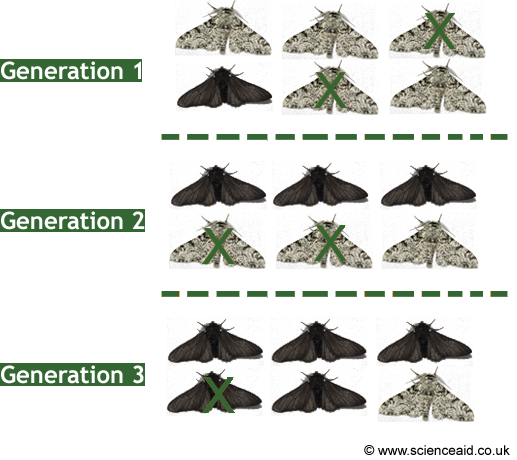 Darwin is as famous as his theory. He was born in Britain in 1809. As a young man, he went on a journey aboard the HMS Beagle, as a naturalist, and spent five years traveling the world and documenting the wildlife he saw. Of particular importance was his visit to the Galapagos Islands off the coast of Ecuador. Here he saw many strange animals (the islands are quite isolated) that made him start to think about natural selection. He returned home and spent his time studying many things from earthworms to barnacles where he developed his ideas on natural selection and evolution. He was worried about publishing his book on evolution because of the controversy it would cause; however, he found out that a friend was coming up with a similar theory, so The Origin of Species was published. The book did prove controversial but also very popular at the same time.

Darwin died on 19 April 1882 (aged 73), leaving a great legacy: changing the way Biologists think about life and becoming internationally renowned with his name and image being instantly recognizable to this day!

Thanks to all authors for creating a page that has been read 826 times.